... a very primitive species ... by marc a. cirigliano

... a very primitive species ... by marc a. cirigliano

As eponymous character Starman observes, "I think you are a very primitive species."

And, he continues with his observation that his planet is different from earth, "The strong do not victimize the helpless." 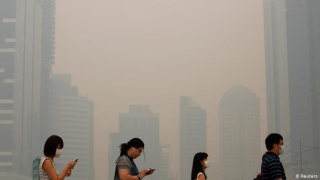 When it comes to climate change the poor around the world are helpless and they are being environmentally victimized.

Climate change and environmental degradation affect us all. In a real sense, we are primitive because we have shown a marked ability not to address the causes of climate change. As we environmentally degrade the planet, where we will all suffer, we have created a situation where we will disproportionately increase the suffering of the poor.

And, we should know, as the Fourth Report of the Intergovernmental Panel on Climate Change (IPCC) states, "Anthropogenic greenhouse gas emissions have increased since the pre-industrial era, driven largely by economic and population growth, and are now higher than ever." The IPCC continues on, "This has led to atmospheric concentrations of carbon dioxide, methane and nitrous oxide that are unprecedented in at least the last 800,000 years." In recent historical memory, the Report determines, "Their effects, together with those of other anthropogenic drivers, have been detected throughout the climate system and are extremely likely to have been the dominant cause of the observed warming since the mid-20th century."

The 1.2 billion people living in extreme poverty are disproportionately affected by climate change. In fact, the UNDP says that developing countries will suffer 99% of the casualties attributable to climate change, despite the fact that the 50 least developed nations have contributed to only 1% of greenhouse gas emissions.

The accelerating factors that are beginning to affect the poor are a decline in agricultural productivity, an increase in natural disasters and extreme weather, more water stress and accompanying droughts, more displacement from threats to livelihood and infrastructure, and risks to human health caused by "poorer air quality, limited access to food and water, changes in temperature, and extreme weather."

Yet, we have collectively made terrible decisions about the environment distracted by leaders who egg us on with wrong choices. As we have written elsewhere in The Eastern Woodlands Fusion, "Our modern lifestyle coupled with the powers-that-be are major obstacles in achieving any meaningful environmental transformation. The lobbying against environmental change is monumental."

On this last point, we have Dino Grandioni write:

Keith McCoy thought he was talking to a job recruiter. Speaking on a Zoom video call in May, the longtime Washington lobbyist talked openly about efforts to blunt the Biden administration's climate agenda on behalf of the nation's largest oil and gas company, ExxonMobil.

In reality, it was not job interview. It was a sting conducted by Greenpeace UK, an environmental group more than 3,000 miles away...

But, this flies in the face of ExxonMobil's professed interest in curbing greenhouse gas emissions in order to mollify climate change. This is simple hypocrisy.

And further, from CNN, the stuff of ignorance, lying and strategic misdirection by GOP Senator Ron Johnson of Wisconsin:

Sen. Ron Johnson insisted again last week that he is not a climate change denier, but CNN's KFile found video of him from just weeks earlier telling a Republican group that it is "bullsh*t."

"I don't know about you guys, but I think climate change is -- as Lord Monckton said -- bullsh*t," the Wisconsin Republican said, without uttering the expletive but mouthing it, and referring to British conservative climate change denier Lord Christopher Monckton. "By the way, it is."

Whether it is ExxonMobile playing both sides of the game to tactically delay any legislative action on fossil fuel emissions and climate change or GOP Senator Ron Johnson (WI) as agent provocateur for the the fossil fuel industry to feed the ignorant who rage against science, the system and liberals.

All the while, fossil fuel emissions continue to grow and the planet continues to warm.

Problems denied or ignored with decisions and policies that deflect, mislead or divide. That is what we have.

Perhaps we are as primitive as a fictional science fiction character says we are.

Note: Image from Reuters via DW.