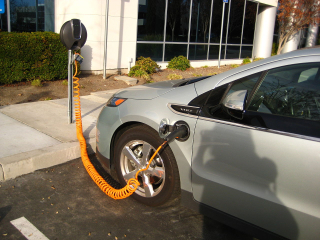 Electric vehicles (EVs) are on the way.

Just as the printing press supplanted illuminated manuscripts, the automobile displaced the horse, electronic communication replaced communicating by post, digital imaging superseded  both traditional photography and cinematic film, electric vehicles--be they cars or trucks--will replace fossil fuel driven vehicles in the next few decades. EVs are entering the realm of mass affordability. And, the major auto manufacturers around the globe are gearing up both in the short-term and the long-term to satisfy what will be an enormous demand.

There are several advantages to electric vehicles: no carbon emissions, no need to stop for gasoline, quieter operation and, from the point of view of engineering elegance, fewer moving parts. The potential benefits of electric vehicles are, as Fleetcarma explains, that EVs and batteries present "an unprecedented opportunity for manufacturers and governments to work together to bring about cleaner technology not just for cars, but across the entire electricity grid."

Yet, this is not to say that there are no hurdles for global societies to overcome as we transform to electric vehicles.

First off, if electric vehicles don't use traditional gasoline, that makes the over 111,000 gas stations obsolete in the long term. Given that: 1) There is sound documentation that the oil companies have publicly denied the connection between fossil fuels and global warming  and, as well, funded others to deny the same, and 2) The oil and natural gas industries employ almost 10 million people, the move to EVs will require a change in public opinion about the climate and also a change in what could be an economic pragmatism to keep the status quo.

Second, charging your electric vehicle takes a lot of time, plus there aren't many charging stations across the US. The current system in the US doesn't know which direction it wants to go, plus there is no single standard for charging.

Andy Daga, writing for The Philadelphia Inquirer, points out that it will be costly and slow to replace all the US gas stations with electric charging ones. He suggests a simple, realistic and technologically proven method for charging electric vehicles. Instead of plug-in full charge stations, there could be inductive charging, much like putting your phone on a pad instead of plugging it in::

Inductive, or wireless, charging is based on an elegantly simple solid-state technology that can be used by any type of electric vehicle, at any power level, without wires or plugs. Beyond the convenience, it costs much less to install, operate, and maintain and so saves money for all users. More frequent automatic charging allows the charging infrastructure to extend driving range without adding more battery to the vehicle. At the same time, it also extends the lifetime of the battery by “grazing” for fuel rather than “guzzling.”

Third, EVs and their batteries also challenge the US power grid. Pew Trusts reports that "the average electric vehicle requires 30 kilowatt-hours to travel 100 miles — the same amount of electricity an average American home uses each day to run appliances, computers, lights and heating and air conditioning." Pew amplifies that:

A U.S. Department of Energy study found that increased electrification across all sectors of the economy could boost national consumption by as much as 38% by 2050, in large part because of electric vehicles. The environmental benefit of electric cars depends on the electricity being generated by renewables.

This means that the US--and mutatis mutandis, the globe--will have to invest in expanding the power grid. Perhaps, too, there will need to be a shift from fossil fuel based power to another form of energy. Meeting even current demand with alternative power is impossible today, let alone what it will be like with an at least 38% increase for electricity by 2050.

Fourth, this brings up the problem with batteries. As the Union of Concerned Scientists (UCS) writes in an extensive report:

Electric vehicles are critical to reducing transportation pollution and solving the climate crisis, but manufacturing them at the necessary scale will require significantly increasing production of the batteries that power them. How batteries are made, what they are made of, and whether they are reused or recycled affect the sustainability of this crucial component.

Even though batteries last many years, they eventually reach the end of their useful life for powering electric vehicles. Policies and incentives for recycling and reusing batteries, including strong health and labor standards, will further lessen the impacts of electric vehicles.

We may soundly conclude that EVs and their accompanying battery system and charging technology will, if done properly, be better for the environment. Getting there will require a massive cultural and technological shift. The promise it offers of reigning in carbon emissions will be worth it. The climate will thank us.

It could also be a lot more fun to dive around. A family friend who runs a large auto auction business posted on her Facebook page a couple of years ago that she rode in a Tesla: "Amazing!"

From Sean Martin, owner of Donek Snowboards, who lives in Colorado:

I made it part way through this and as usual its clear the author has never been behind the wheel of and EV or understands much of anything.

1. An EV is not an zero emission vehicle unless you live in Iceland or have enough solar on your home to accomplish such a thing. It is a lower emission optio. Than gas.

2. Charging your EV takes a lot of time. I guess that depends on your plans. Even with a full discharge on my bolt, i have yet to not be fully charged by morning. My declared range is 256 miles but I easily ger 300. The 3 times I have needed a piblic charger has provide 1/2 of my range in thw time it took to got get a sandwich from subway and eat it.

3. 30kwhrs for 100 miles. I drove 80 miles today on 16 kwhours in the mountains with 3 passengers. That number may be accurate for an electric SUV, but not for a bolt or a tesla 3.

Im sorry but I kind of gave up on the article at this point. Its just jot accurate or well researched, which is my experience with every article making these claims.