Home Ecology Politics Creative Writing Arts Archives About Us
... from Foreiegn Affairs: The Coming Coronavirus Recession And the Uncharted Territory Beyond by Mohamed A. El-Erian
...from The Washington Monthly: The GOP Principles That Paved the Way For Massive Suffering by Nancy LeTourneau

Monday April 6 this week in 2020 is the 500th anniversary of Raphael Sanzio’s death.

Raphael (1483-1520) was one of the triumvirate of great Italian High Renaissance painters, the other two being Leonardo (1452-1519) and Michelangelo (1475-1564). Contemporary sobriquets were “the marvelous” for Leonardo, “the divine” for Michelangelo and “the princely” for Raphael. Leonardo scientifically investigated the natural world in order to make his painting more true to life. Michelangelo explored the expressive possibilities of the human form. Raphael developed human dramas in three-dimensional space.

“Princely” was, indeed, part of Raphael’s personality. Affable, diplomatic, able to reconcile feuding artists to work together as his assistants and, above all, charming, Raphael died at the young age of 37, but left an oeuvre of work that is often erroneously simplified into clichés that distort Raphael’s achievements as a painter.

For example, in this vein, Rolf Toman writes, Raphael “developed instead an expansive style of composition which presented itself as a homogeneous and easily intelligible whole.”[1] 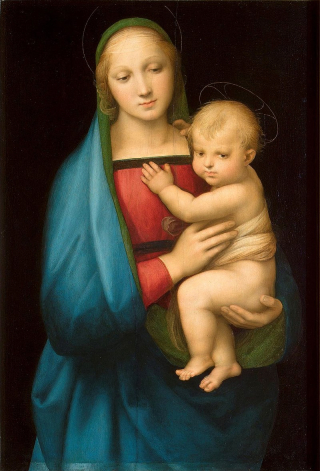 On the path to comprehending Raphael’s breadth and depth as a painter, we have E. H. Gombrich’s judgment of his Madonna dell Granduca (c. 1505). Gombrich restates the problem of erroneously oversimplifying Raphael’s style:

Raphael's greatest paintings seem so effortless that one does not usually connect them with the idea of hard and relentless work. To many he is simply the painter of sweet Madonnas which have become so well known as hardly to be appreciated as paintings any more. For Raphael's vision of the Holy Virgin has been adopted by subsequent generations in the same way as Michelangelo's conception of God the Father We see cheap reproductions of these works in humble dwellings, and we are apt to conclude that paintings with such a general appeal must surely be a little 'obvious'.

Gombrich goes on to point out that Raphael’s so-called simplicity is the result of years of diligence and the resultant mastery:

In fact, their apparent simplicity is the fruit of deep thought, careful planning and immense artistic wisdom. A painting like Raphael's 'Madonna dell Granduca' is truly 'classical' in the sense that it has served countless generations as a standard of perfection in the same way as the works of Pheidias and Praxiteles. It needs no explanation. In this respect it is indeed 'obvious'. But, if we compare it with the countless representations of the same theme which preceded it, we feel that they have all been groping for the very simplicity that Raphael has attained. We can see what Raphael did owe to the calm beauty of Perugino's types, but what a difference there is between the rather empty regularity of the master and the fullness of life in the pupil!

For sure, many before and after Raphael had a “simplicity” in their painting, the “empty regularity” of his master Perugino’s work, as Gombrich’s example, but none had “the fullness of life” of Raphael. And, here is one of the keys to grasping Raphael’s accomplishment. As Gombrich explains:

The way the Virgin's face is modeled and recedes into the shade, the way Raphael makes us feel the volume of the body wrapped in the freely flowing mantle, the firm and tender way in which she holds and supports the Christ Child - all this contributes to the effect of perfect poise. We feel that to change the group ever so slightly would upset the whole harmony. Yet there is nothing strained or sophisticated in the composition. It looks as if it could not be otherwise, and as if it had so existed from the beginning of time.

Yes, Raphael models his figures subtly, makes his three-dimensional figures move freely and has his Madonna’s grasp tender. And, certainly, to change any of this would destroy the work.

Analogously, I would point out the transparency and seeming simplicity of Mozart. Outwardly simple notes, yet, to perform them with mistakes immediately shines light on poor technique and inferior musicianship. The same holds for Raphael’s Madonna, which reveals perfect and pure technique. How difficult is it to draw the Madonna's face like Raphael has? How challenging is it to model with glazes from pale to rosy, from light to shade as he does? The answer: exceedingly.

We can go further, though, beyond our grasp of a technical mastery that few have ever achieved, in comprehending: 1) The variety and subtlety of Raphael’s figures, and 2) The complex, cutting-edge compositions of his mature work.

1) Raphael’s Ecstasy of St. Cecelia, with full image and details on the history and iconography here, reveals his depth of characterization as you look at, from left to right, St. Paul, St. John the Evangelist, St. Cecilia, and Mary Magdalene. Although no photographs do justice to Raphael’s discerning brush, you can see, if you click on the image, that each figure transcends a simple stereotype. In fact, each time you revisit the painting, you see something new in Raphael’s characterizations.

So, no sweet glances, no stereotypical vapid expressions here.

2) This brings us to the second point, the complexity of his compositions, with their accompanying thematic complexity.

For one of these, you can visually explore Lo spasimo di Sicila (Christ on the Way to Calvary) (1516) on your own. Engagingly complex it is. 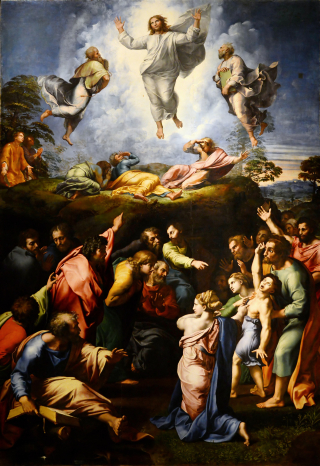 But, as well, we should take a moment to analyze the composition of Raphael’s Transfiguration (1516-20).

Embracing two sequential events from Gospels of Mark and Matthew, we have Jesus transfigured on Mount Tabor, while in the scene below, the Apostles struggle and fail to cure a possessed boy. The message here is a simple one: Christ is divine, only he can cure and redeem, a theme definitely aimed to negate the Protestant assertion that, as a faithful Christian, you can go it alone without the Church.

The compositional complexity here is well beyond the fact that it depicts two sequential biblical themes at the same time.

It goes much deeper.

The contrasting celestial light of illumination in the upper section contrasts with the lower with its deep, dark chiaroscuro of an ignorance and frustration removed from true knowledge. The strong chiaroscuro is also one path of development out of the High Renaissance style that will later be adopted throughout the European Baroque.

The thematic complexity of the lower scene is in keeping with the then developing Mannerism, with its emphasis on sophistication as defined by no single focus in a composition. Figures glance all about, as they gesture the same. However, there are two Baroque-like—before there was a Baroque—repoussoir figures in the lower left that lead us into the composition, as does the female figure in the lower center right. Moreover, the calm, falsely attributed to Raphael’s depictions, is belied by the strong emotions in both facial and bodily expressions.

Taken alone, as in this image of the lower section, one might think we are looking at a Baroque painting. Finally, often people see symmetrical triangles in Raphael’s (and many other Italian Renaissance artists') work, as we see in the 19th century lecture schematic by J.M.W. Turner, Romantic painter. That is one way to look at the upper half of the painting. However, if we look at this other schematic with lines superimposed over both actual and implied lines of the actual composition, we see that there is asymmetry, a quality that reinforces the emotional intensity of the Transfiguration, Jesus linked directly to the divine, and the disquieting nature of the failed healing below, humanity adrift. This asymmetry is, by the way, similar to that in Leonardo’s Adoration, another painting focusing on human strife. 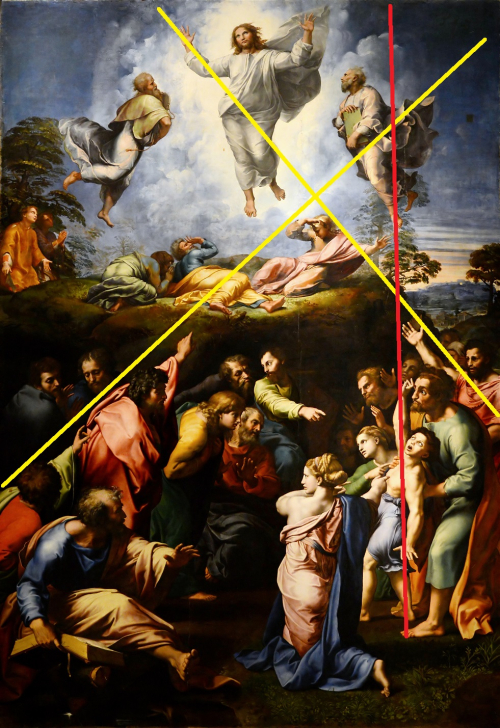 And, then this image, which further clarifies the compositonal complexity. 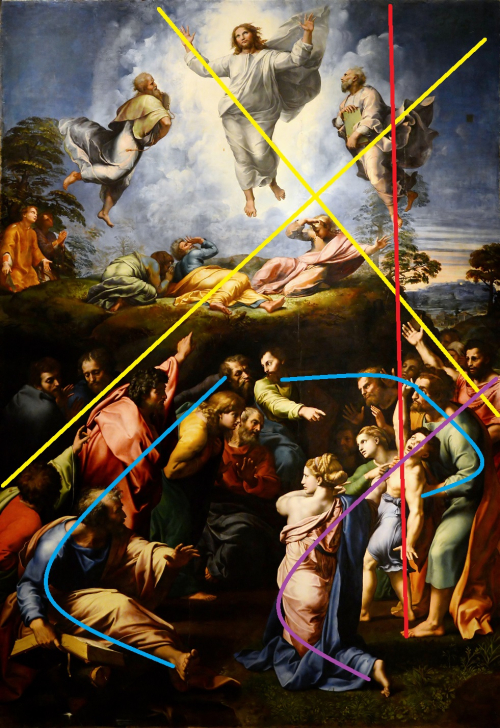 Be that as it may, April 6, 2020 is the five hundredth anniversary of Raphael’s death. His stature, last days and significance are well recounted by Giorgio Vasari in Book Three of his Lives:

Meanwhile, pursuing his amours in secret, Raffaello continued to divert himself beyond measure with the pleasures of love; whence it happened that, having on one occasion indulged in more than his usual excess, he returned to his house in a violent fever. The physicians, therefore, believing that he had overheated himself, and receiving from him no confession of the excess of which he had been guilty, imprudently bled him, insomuch that he was weakened and felt himself sinking for he was in need rather of restoratives. First, like a good Christian, he sent his mistress out of the house, leaving her the means to live honourably. Next, he divided his possessions among his disciples. Giulio Romano, whom he had always loved dearly, and the Florentine Giovanni Francesco, called Il Fattore, with a priest of Urbino, his kinsman, whose name I do not know. Then he gave orders that some of his wealth should be used for restoring with new masonry one of the ancient tabernacles in S. Maria Ritonda, and for making an altar, with a marble statue of Our Lady, in that church, which he chose as his place of repose and burial after death, and he left all the rest to Giulio and Giovanni Francesco, appointing as executor of his will Messer Baldassarre da Pescia, then Datary to the Pope. Finaly, he confessed and was penitent, and ended the course of his life at the age of thirty-seven, on the same day that he was born, which was Good Friday. And even as he embellished the world with his talents, so, it may be believed, does his soul adorn Heaven by its presence.

Rest in peace, our complex artist and friend.

[1] Textual quoates here are from Mark Harden's Artchive. The first is from "The Art of the Italian Renaissance: Architecture, Sculpture, Painting, Drawing", by Rolf Toman, while the next series are from E. H. Gombrich's The Story of Art. Retrieved April 4, 2020, from Artchive, “Raphael,” http://www.artchive.com/ftp_site.htm. There is a link to the Vasari text  in this article.

Intriguing insight to the masterful Raphael. Leads one to wonder what even greater heights of achievement he might have reached had he lived longer.