Home Ecology Politics Creative Writing Arts Archives About Us
My trip home in CV19 America … by a friend of the Woodlands
Observations on the Complexity of Raphael, Who Died April 6 Five Hundred Years Ago by Marc A. Cirigliano

... from Foreiegn Affairs: The Coming Coronavirus Recession And the Uncharted Territory Beyond by Mohamed A. El-Erian

... from Foreiegn Affairs: The Coming Coronavirus Recession And the Uncharted Territory Beyond by Mohamed A. El-Erian    March 17, 2020 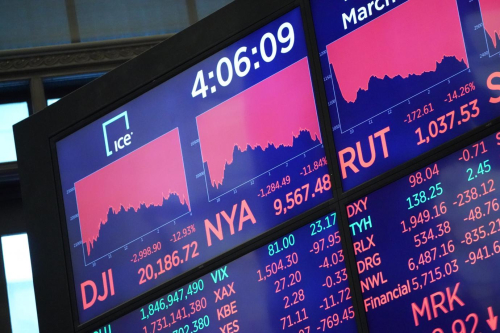 The closing numbers at the New York Stock Exchange for Monday, March 16, 2020

The global economy will go into recession this year. The downturn will be sudden and sharp. And although a constructive response from policymakers, companies, and households could limit its duration, its effects will be felt for decades to come.

Most economic forecasts for 2020 predicted a year of steady if not rising growth. The International Monetary Fund’s January forecast update saw growth picking up from 2.9 percent in 2019 to 3.3 percent in 2020. And there were plenty of reasons to be optimistic: the “Phase One” trade agreement between China and the United States, the reduction of Brexit-related uncertainties, and strong consumer spending, especially in the United States and Germany, which seemed likely to spur companies to proceed with delayed investment plans.

Then came the novel coronavirus. With the economic shock of the health crisis spreading around the world, economists are scrambling to revise their projections. The Organization for Economic Cooperation and Development recently slashed its forecast for 2020 growth by half, from 2.9 percent to 1.5 percent, and the IMF has signaled that it will issue a significant revision soon. But even this first round of revisions may have been too optimistic, since they incorporated the widely held (but incorrect) assumption that the recovery would follow a sharp V-like pattern—a first-quarter hit that is immediately offset in the second quarter. With growing recognition that a U-shaped recovery is more likely, forecasts will need to be revised down again, and revised down sharply. They will also have to take more seriously the risk of an L or even an I—that is, a market that remains flat or in free fall for some time—if severe financial dislocations end up adding to the global economy’s woes.

Before the pandemic, many major economies, including Germany, Italy, and Japan, were already ill-equipped to handle even small adverse exogenous shocks. Other economies, such as China and the United States, had stronger organic growth momentum, but even that could prove insufficient to avert a downturn. Excessive risk-taking and central bank policies that artificially repress financial volatility have been planting seeds of instability for years—if it hadn’t been the new coronavirus, something else would have triggered the demise of the “new normal” that has characterized the sluggish and unequal recovery from the 2008 global financial crisis.

The sudden economic disruption caused by the new coronavirus is especially destructive because it is denting and in many cases destroying both supply and demand. Such a shock, common in fragile or failed states and countries hit by big natural disasters, is highly unusual in advanced economies. Consider the effect on the airline industry, which is a leading indicator for many other sectors rather than an exception. Actual and perceived risk of infection on planes has triggered an enormous number of cancellations. Government directives to close borders have dealt another blow to demand. In response, airlines are sharply curtailing flights as they try to maintain operational and financial viability. The resulting staff layoffs and cuts to payments to suppliers will cause additional income losses that further depress demand in what economists call a “negative multiplier effect.”

The initial phase of the health response, while critical for saving lives, is only going to make things worse for the economy. Measures such as “social distancing,” separation, and isolation are inherently inconsistent with what drives economic growth, employment, and financial stability. Modern economies and governments are built for interconnectivity and integration. The health response will shut down one economic sector after the other. The result will be not just deglobalization and deregionalization but also massive economic shutdowns at the national and local levels.

For the private sector, corporate income statements and balance sheets will be hit hard, from all sides and with a force that will outmatch contingency plans for even the most extreme negative shocks. Revenues will decline sharply. Costs will go up. Cash cushions will be deployed. Credit lines will be drawn. New bond issuances will be almost impossible, especially for companies with significant debt to refinance. Stock markets will see huge volatility around a downward trend.

In such a scenario, investors and traders will scramble to reprice both equity (how much they are willing to pay now for a stream of future corporate income) and credit risk (how seriously they take the risk of default). The resulting shock to stocks and other risky financial assets will be amplified by structural fragility: lulled into complacency by ample and predictable injections of central bank liquidity, many investors have for years stretched too far and too wide in search of returns, and the system has accommodated their excessive risk-taking. Like a mass of people rushing to exit a small door, investors racing back to safety puts enormous pressure on the functioning of markets. And with that pressure comes heightened risk of financial instability worsening the downturn in the real economy—what economists call “reverse contamination.”

The new coronavirus need not cause a financial crisis as sudden or as dire as that of 2007 and 2008. The banking system isn’t a source of the problem this time around. In several major economies, particularly the United States, the banks are better capitalized and managed. And the payments and settlement system, the nerve center of finance that enables everything else to function, is much stronger today.

But it won’t be easy to restart a modern interconnected global economy after the initial health threat has passed. Recovery will begin when health officials can assure people that the new coronavirus has been contained and that immunity to the disease it causes, known as COVID-19, has increased. (An effective vaccine would do both.) Recovery will likely be rapid, but it may not be instantaneous. Restoring normal staffing levels, inventory, and supply chains will take companies time after weeks or even months of inactivity. So will implementing and harmonizing government policies designed to get the global economy humming again.

A PATH TO SAFETY

The good news is that the right response from governments, businesses, and individuals can limit the coming downturn, shorten its duration, and contribute to a sharper, stronger, and more sustainable recovery. The first phase of the response should involve targeted and timely government interventions to protect the most vulnerable segments of society, to safeguard critical sectors of the economy (starting with health care, where rapid progress is the key to establishing an economic bottom), and to ensure that financial markets continue to function soundly. To the extent that is possible, governments should refrain from relying on general policy tools such as interest-rate cuts and broad fiscal stimulus during this initial phase of the response. The political pressure to make use of these tools will be overwhelming—and indeed, the U.S. Federal Reserve has already cut rates sharply to near zero—but their effectiveness in a moment like this is much diminished. After all, are people who are panicking about a pandemic likely to start traveling or taking cruises again if they are given tax credits or cheap loans?

Only as the new virus is being contained and immunity enhanced should these general policy tools be deployed en masse as part of the second phase of recovery. Ideally, this phase will also target sectors and activities that improve longer-term productivity and growth, such as infrastructure and education. There will inevitably be tough decisions to make about whom to bail out, why, and how.

Governments should also coordinate, both internally, to enable “whole of government” responses, and externally at the regional and global levels. Government and central bank policy interventions can be turbocharged by well-designed and well-executed public-private partnerships. And the impact of these partnerships, particularly on financial markets, can be amplified and accelerated by clear, transparent, and consistent communication.

While governments move to stabilize economies and financial markets, banks and private companies can help minimize the severity and duration of the coming recession by doing their best to prevent liquidity problems from becoming solvency ones. Bank forbearance would be of great help, as would special funding windows for small- and medium-scale enterprises.

The Great Recession that followed the 2008 global financial crisis precipitated a “new normal” of persistently low growth, artificial financial stability, and a worsening inequality (a trifecta that affected income, wealth, and opportunity). The middle class, midsize firms, and even the political center were all slowly hollowed out over the next decade, fueling political anger and antiestablishment movements. The result was a series of outcomes that would have been unlikely if not unthinkable before the Great Recession: negative interest rates in Europe and Japan and a pivot from championing free trade to staunch protectionism in the United States, among other surprises.

The new coronavirus shock is also likely to alter the global economic terrain, resulting in a “new, new normal.” Deglobalization and deregionalization will accelerate, redefining worldwide chains of production and consumption. Public- and private-sector emphasis on cost-effective and efficient global supply lines will give way to excessive risk aversion and resilience management. And economic tools, particularly related to trade and investment, will be weaponized more frequently as national security trumps economic concerns. The global economic landscape will look different when the dust settles from the new coronavirus shock. But with timely collective action, the pain of the coming recession can be limited.