... from Bloomberg: If Trump Won’t Lead the World, Others Must by Michael R. Bloomberg

Reprinted from Bloomberg under Fair Use.

If Trump Won’t Lead the World, Others Must

The White House leaves a leadership vacuum in the midst of a pandemic. 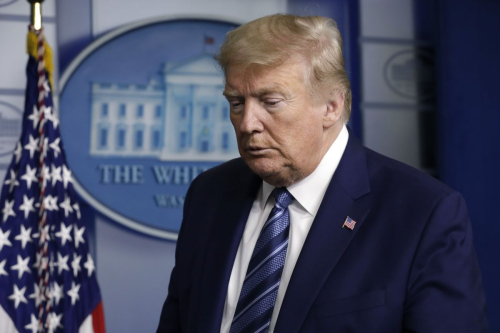 The gravest emergency to confront the U.S. in decades has fallen on the watch of a uniquely unfit president. At a time when the world should be looking to the White House for wisdom and leadership, it finds only Donald Trump’s characteristic blend of incompetence and dishonesty. His musings last week about killing the virus by ingesting disinfectant were a gift to comedians, but as always with Trump, the joke is on us.

Fortunately, many mayors and governors (though not all) have been rising to the challenge, taking action, heeding science, communicating reliable information, and collaborating with one another. In Washington, the Federal Reserve delivered prompt and comprehensive interventions to support the financial system. Even Congress, for all its dysfunction, has acted faster than its record of partisan paralysis would have suggested.

One of the virtues of our federal system of government is that it has sufficient strength and depth to keep working even if the person at the top isn’t up to the job. But internationally, the picture is deeply troubling. America’s abdication of leadership during a crisis that demands international cooperation is far more difficult to remedy.

The coronavirus pandemic is a global emergency, which makes it both necessary and possible to align governments as allies in a war against the disease. But that has not happened. Resources — materials, information, research — should have been marshaled to avoid waste and duplication; they were not. Export controls on essential equipment should have been discussed and agreed to, where necessary; instead, countries imposed them unilaterally. The World Health Organization and other agencies should have been recognized as vital global assets, staffed and funded accordingly; President Trump, in an attempt to shift blame away from the White House, announced that he would withhold funding to the WHO.

The president’s failure to play a leadership role in coordinating the global response has a terrible cost that can be seen in the numbers of both lost lives and lost jobs. Before the pandemic hit, a sky-high stock market masked deep economic problems — including weak capital investment, low growth rates and rising inequality — that were being made worse by Trump’s misguided and counterproductive trade wars and tax policies. Now, if Trump’s assault on the global trading system continues, the economic recovery will be slow in coming and tepid when it arrives.

All these issues should be at the front of the president’s mind. They aren’t — his obsession with his media treatment remains all-consuming — and in so many ways he’s simply made things worse. There’s only so much that other governments can do to fill the vacuum. Acting in concert with philanthropic and business allies around the world, they should do what they can.

For instance: The European Union, the Comprehensive and Progressive Agreement for Trans-Pacific Partnership, and other regional efforts at cooperation and mutual assistance could help fill the void. France, Germany, Japan, the U.K. and others can work together in mobilizing the Group of 20. China can play a role in providing debt relief and supplies of equipment for developing nations. All these governments should realize that with the White House on the sidelines, they need to step up, and quickly.

Nongovernmental organizations and foundations also must do more. Alliances blending philanthropic, corporate, and state and city efforts to combat the virus have already been especially valuable. The Bill & Melinda Gates Foundation is spending heavily on the development of vaccines and treatments, and on aid to Africa and South Asia. Bloomberg Philanthropies has launched initiatives to help cities manage the pandemic and to support vulnerable low- and middle-income countries, through its partnership with the WHO.

Trump’s disdain for international cooperation should galvanize leaders here in the U.S. and around the world. Of course, presidential leadership can’t be fully replaced. But in a time of war, we must fight with the army we have.