Inside the Adirondack Blue Line by Lesia Vincent

Inside the Adirondack Blue Line  by Lesia Vincent

There once was a time early in our marriage when the responsibilities of child-rearing and house stewardship was not even on the horizon. The cloud of trouble lightly touched our family with my ectopic pregnancy and father-in-law’s cancer prognosis hanging in the air. Death would not visit our clan for another few years and, then, would seemingly act like a visiting relative who has outstayed their welcome.

At the time I was working at an advertising agency, a place many people clamored to obtain employment, but I knew within the first 60 minutes of my first day that it was a mistake to have accepted the position. In trying to belong to this pseudo-Mad Men scenario, my own way of thinking felt compromised and I wondered what it would be like to live life among them. The term “the grass is not always greener” applied to this matter and it began to affect my marriage in one way or another. Not in any grandiose way, but small, ideological thoughts that burrow in one’s mind and cause self-doubt to become a cancer in one’s soul.

John and I were living in our third residence together, which was a small ranch in the Sea Breeze area. 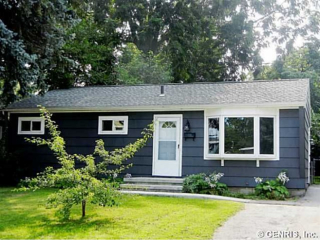 For some reason that I cannot recall, we decided to go for a long drive. Our in-laws were more than happy to dog sit our Pug, Alfred, as we headed on 104 East to parts unknown. 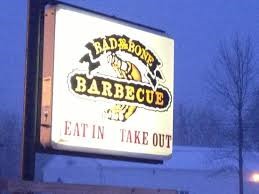 It was a peaceful outing and as we hit Webster and then Williamson, we stopped at an eatery called Bad to the Bone BBQ. The takeout items were quite delicious, even though I cannot remember what we had ordered!

As we kept on driving through the scenic route our conversation turned to pleasant and sometimes not-so-pleasant topics.
We landed in Watertown and decided to purchase a Sirius satellite radio so we could listen to radio channels without commercial interruption. After a few minutes in the Wal-Mart parking lot, we got everything installed and headed east once again. 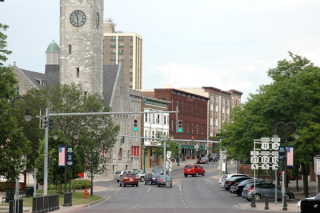 What was interesting about this road trip was not the little stores, houses and businesses that we drove by, but an overall feeling of the natural landscape becoming larger than anything else that surrounded it.

As we kept on driving and listening to the radio station, Little Steven’s Underground Garage, the feeling of nature taking over began to materialize even more intensely. We stopped at a gas station and then continued further. Suddenly, a cluster of pine trees emerged on both sides and
seemed to be huddling together, as if creating a barrier or guarding some unknown secret beyond its borders. It was incredibly breathtaking and the first thing that came to mind were the stories my mother would tell of her homeland in Ukraine. She would mention how the pine trees were long and thin, huddled together so much that there was barely any space between them. For a brief second, felt like I was in my mother’s memory of home and a connection was instantly made to this magnificent place. 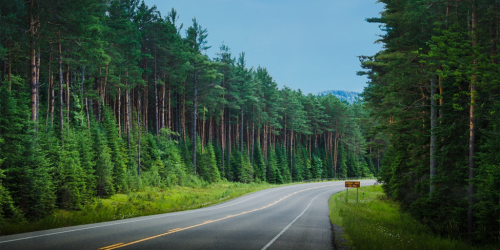 A mile or two later, a sign announced that we were entering the Adirondacks and it felt like we belonged in this place. 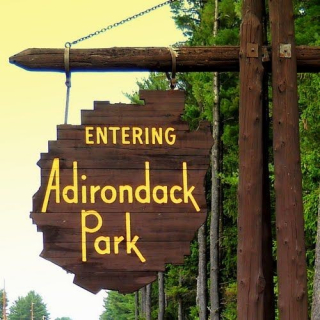 Even the air smelled different – crisp and clean. And this just wasn’t due to the autumn season that was beginning to hit this region. There was a calmness that seemed to have its own mantra:

You will be all right. You are here right now and that is a good thing.

Forget about that which you left behind.

Those problems matter not when you’re within the Blue Line.

We kept going and hit the town of Speculator, whose name I found amusing and began to chant out loud: 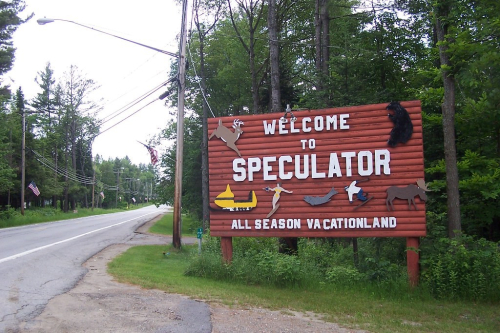 This has now become a tradition of mine every time we pass through there, much to the dismay of my husband.

Continuing, our journey wound up to Indian Lake, which is part of the Central Adirondacks region. I kept trying to get a glimpse of the water, which seemed to elude me. Giant rocks and pine trees surrounded the lake until there was finally a clearing and I was able to see it with my own eyes: 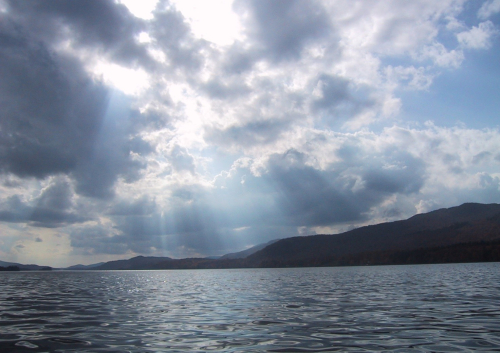 As our Toyota wagon pushed on, we noticed a Vacancy sign outside a ‘50s-era motel called Squaw Brook. We pulled in and got a room but wanted to continue a little further before calling it a night. 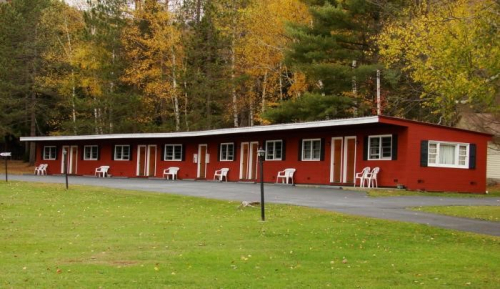 A cluster of shops was just down the road and we received a full view of “Adirondack Style”. 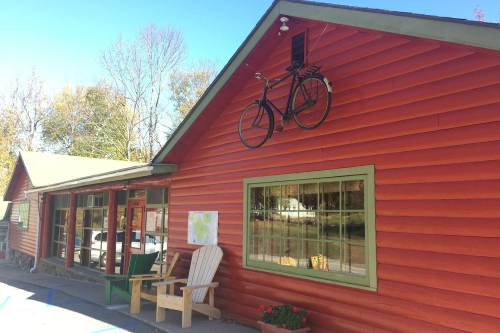 As we finished our meal at a local watering hole, The Indian Lake Restaurant & Tavern, and were heading to our car, we heard a distinct sound in the distance: 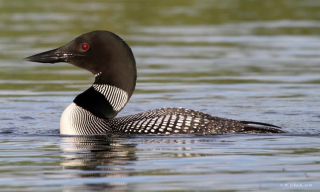 We found out later, that was a staple of many sounds that are found within the Adirondacks.

As we were heading off to bed, we kept the television on, even though the reception was quite poor. In the middle of our conversation we heard a voiceover for an automobile commercial. And yep, you guessed it. The voice was that of the owner of the advertising agency where I was currently employed. John and I broke out in peals of laughter, understanding the irony of being all the way out in wilderness and having someone that obnoxious intrude on your day off.

It didn’t really matter to me. Because I received a gentle call of the Adirondacks to remind me who I was and what I was about. I think that day John and I both did.

The next day we drove through the little village of Indian Lake and saw their tin-roofed theater: 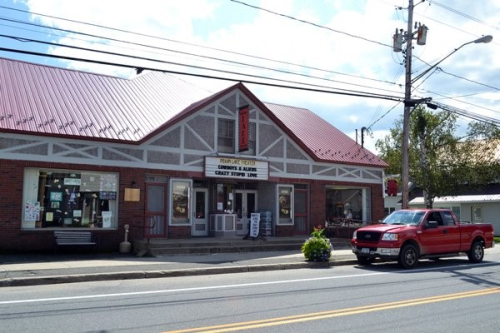 As well as some of the Adirondack, handcrafted pieces created by local artisans: We were a few weeks shy of seeing the Adirondack Mountains Antique Show that occurs every year and attracts visitors from all parts of the country who are purveyors of the unique. Also, in tandem with the antique show, would be the changing of the leaves which happens on a massive scale of 6 million acres within the park.

Leaving here was a sad departure but we knew we would be back. After all, to us this place was home. 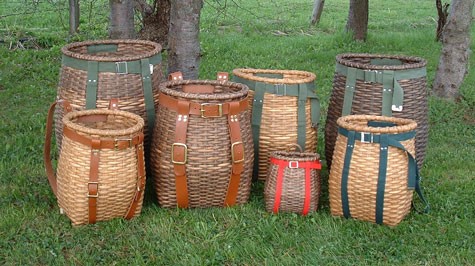