Home Ecology Politics Creative Writing Arts Archives About Us
... from Cassandra's Legacy: The Doom that Came to Florence by Ugo Bardi
Social Distancing at the Lake by Blanche Warner

... from Intelligencer on COVID-19: The Leader of the Free World Gives a Speech, and She Nails It by Justin Davidson

Reprinted under Fair Use from Intelligencer.

The Leader of the Free World Gives a Speech, and She Nails It 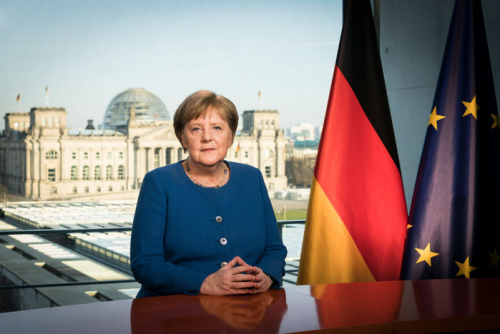 Angela Merkel doesn’t do drama and she doesn’t give speeches on TV. So the mere fact that the German chancellor faced the camera across a desk and spoke to the nation Wednesday evening made the gravity of the situation clear. “Es ist ernst,” she said—“This is serious”— and those three bland words had more power than a hellfire sermon. Then she pivoted from statement to plea: “Take it seriously.” Quickly, she moved on to historical context, the reason for her unprecedented impromptu appearance: “Since German unification—no, since the Second World War—no challenge to our nation has ever demanded such a degree of common and united action.”

Merkel made no specific announcements and called for no nationwide curfews or additional closures. Yet what gave her address its force was her tone, which was direct, honest, and searingly empathic. She laid bare not just the test we all face but also the solace that leadership can provide. Without accusations, boasts, hedges, obfuscations, dubious claims, or apocalyptic metaphors she did what a leader is supposed to do: explain the gravity of the situation and promise that the government’s help would flow to everyone who needed it. She gave full-throated thanks to front-line medical workers, assured Germans that there is no need to hoard, and paused to offer gratitude to a group of workers who rarely get recognized by heads of state on national TV: “Those who sit at supermarket cash registers or restock shelves are doing one of the hardest jobs there is right now.”
This is a war without a human enemy, and Merkel lay no blame. She asked for the sacrifice of discipline, for heroic acts of kindness. She acknowledged the paradox in calling for solidarity and apartness at the same time. She understood how painful it is that just when people desperately want to come together, families and friends have to endure separation. To Americans, Merkel’s appeals to democracy, and her sadness at having to use the full weight of her authority, come as a welcome shock. No German could listen to her calls for self-policing without recalling that she grew up in East Germany under the eye of the Stasi. “For someone like myself, for whom freedom of travel and movement were hard-won rights,” she said, “such restrictions can only be justified when they are absolutely necessary.” No American could hear that statement and fail to contrast it with our own leader’s ringing words: “I don’t take responsibility at all.”