Home Ecology Politics Creative Writing Arts Archives About Us
on the road by mark kromer
Trump: the Blamer Goes Full Berzerker by Marc A. Cirigliano

... from Electoral-Vote.com: Barr Lashes Out?

Reprinted under Fair Use.

Image not part of orignal article, but from Mother Jones. 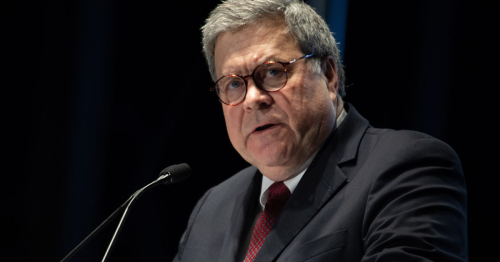 ... from Electoral-Vote.com: Barr Lashes Out? by "The Votemaster" (Andrew Tanenbaum) and "Zenger" (Christopher Bates)

Attorney General William Barr is, apparently, very cross with Donald Trump. Sitting for an interview with ABC News, he complained about the difficult corners he's been painted into by the President's public comments and tweets, and declared: "I think it's time to stop the tweeting about Department of Justice criminal cases."

Let us start by stepping back and pointing out that the following sequence of events is not in dispute:

In his Thursday interview, Barr said that his department was already planning an amended filing in the Stone case, and that Trump just so happened to send the tweet right before they filed it. The AG also claimed that the filing wasn't as "nuanced" as he expected.

There would seem to be two basic readings of all of this. The first is that the Barr-Trump relationship has soured a bit, and that the AG is traveling down the path that so many others have traveled before him. Former AG Jeff Sessions, former Chief of Staff John Kelly, former lawyer/fixer Michael Cohen, and former NSA John Bolton are among those who moved from the catbird seat to the doghouse.

The second reading is that Barr is getting a little nervous about exactly how far he's stuck out his neck on behalf of Trump and, recalling that folks like that tend to end up under the bus, he's decided to give himself a little cover. Heck, it's even possible that Trump himself is concerned about the optics of the whole situation, and that the President and the AG sat down and cooked up this bit of political theater to give themselves both some cover. Given how often Barr has been willing to do Trump's dirty work, and given that he got the job in the first place because of all the manure he toted on behalf of Ronald Reagan and George H.W. Bush after Iran-Contra, our money is on the interpretation that Barr isn't actually upset. We should know pretty soon, though. When Trump administration insiders fall from grace, they tend to fall fast. (Z)