... from Cassandra's Legacy by Ugo Bardi: Italy Under the Coronavirus Attack: the Return of the Plague Spreaders

Reprinted from Cassandra's Legacy with permission.

... from Cassandra's Legacy by Ugo Bardi: Italy Under the Coronavirus Attack: the Return of the Plague Spreaders 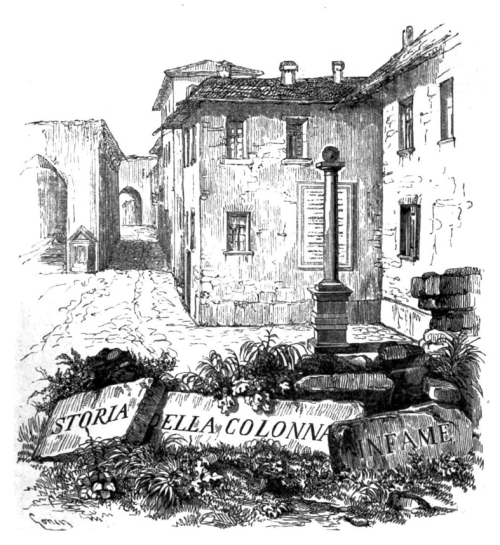 This post is about how Italy is reacting to the diffusion of the COVID-19 epidemics that arrived during the past few days in the Northern regions of the country. Among other effects, it generated a wave of hate on social media comparable to what had happened in Italy at the time of the bubonic plague, in Milano during the 17th century. That epidemics was widely attributed to evil plague-spreaders ("untori"), so much that a "column of infamy" -- shown above -- was erected to commemorate the execution of two of them.

Alessandro Manzoni (1785-1873) was one of the greatest Italian writers in history, known also outside Italy for his novel The Betrothed ("I Promessi Sposi"). Manzoni lived well before the existence of social media and, in his times, even newspapers were something new. But he was a fine observer of society and I would go as far as to say that he could be seen as one of the early creators of the science we call today "memetics," the science of the diffusion of ideas ("memes").

In The Bethroted and the later historical essay "A History of the Column of Infamy," Manzoni told the story of the bubonic plague that struck Milano in 1629-1631. Hitting a society already weakened by a previous famine and by the disaster of the 30 years war, the plague took a toll of nearly 50% of the population. Those who experienced it fell prey to a delusion that led them to think that the plague was caused by the actions of evil people termed the "untori", a well-known word in Italian but hard to translate into English. Literally, it means "greasers," and it refers to people who would spread poisonous substances over people and things in order to spread the infection -- the term could also be translated as "plague-spreaders." The greasers were supposed to engage in infecting people because they were possessed by the devil, maybe for political or economic gains, or simply because they were evil.

The novel and the essay by Manzoni provide an amazing account of how the untori meme spread among the citizens of Milano to the point that several innocent people were lynched in the street. Others were accused, tortured, and forced to confess their pretended crimes. Then they underwent trials that were nothing more than witch-hunts (in this case, greaser-hunts). Several were executed and, in one case, a stone column ("The Column of Infamy") was erected to commemorate the execution of two of them.

In this story, we can immediately recognize our world: the existence of the evil greasers is a classic example of fake news. The aggressive reaction of the public is something we see every day on our social media where, fortunately, people are not lynched for real (so far). An especially interesting touch by Manzoni is the fictional character of Don Ferrante, a mediocre Milanese intellectual who finds a moment of popularity when he starts declaring that the plague doesn't exist or that, in any case, it is not contagious -- rather, it is the result of a weird astral conjunction. We recognize in this character some of our modern climate-deniers who maintain more or less the same thing about climate change. Eventually, Don Ferrante catches the plague, too, but up to the last moment he keeps denying that it exists. He dies cursing the stars!

Certain things are timeless and don't depend on the existence of the Internet or even of the printed media. But, today, for sure the Web can spread hate and fake news at an unbelievably fast speed. In Italy, the COVID-19 epidemics arrived just a couple of days ago and the social media are already exploding in a wave of hate against the current untori, in this case supposed to be the Greens, the Government, the Communists, Immigrants, Africans, and in general the "do-gooders" (in Italian, buonisti), supposed to have done nothing to avoid the spreading of the pandemics when it was still possible to stop it.

Overall, the coronavirus is a threat that can't be even remotely compared to the bubonic plague, but the reaction of many people is about the same: they want blood. They are stating that clearly in their comments (just one example I read yesterday: "I am a mother, if my children catch the coronavirus, you Communists will die first!). Curiously, these are often the same people who accuse climate scientists of being "alarmists."

In the beginning, the Italian Right seemed to be willing to ride the issue and use it as a tool to make the current left-center government fall. But it seems that the leaders are now backtracking and trying to control their overexcited followers. So, cool heads may still prevail and we won't see people lynched in the street accused of being untori (but we did see physical attacks on people looking Chinese -- fortunately without victims, so far). The situation is rapidly evolving and we'll see what happens in the coming days.

One thing that's already clear, anyway, is that the current political system, polarized as it is, makes it impossible to face emergencies without exaggerating the threat or, conversely, denying it. In every case, one of the two sides is tempted to ride the issue to gain traction in the political game. That's a disaster that leads nowhere. We are seeing it well for climate change and not just in Italy: with this decisional system, we can't control anything. We can only hope for the best (a concept expressed in Italian as trusting "lo stellone" the great star of Italy).

Note: Manzoni was not a prolific writer. Apart from poems, he left us one novel, two tragedies, and one long essay. All are absolutely worth reading. In particular, if you have time, read Manzoni's Adelchi. The story of this Longobard prince is written in a style that for us is a little unusual, but it is a powerful story, truly epic and human at the same time. It prefigures our modern fascination with the Middle Ages.