Home Ecology Politics Creative Writing Arts Archives About Us
a langston hughes allusion by sheila byrne
... from the Bangor Daily News: The Confederate battle flag isn’t a symbol of Southern heritage. It’s a flag of treason. by Arthur Greif 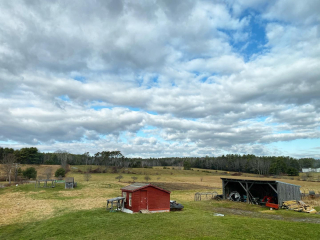 As the Thanksgiving and Christmas Holidays approach us, in small town Marlboro, NY, and my husband and I visited the annual Marlboro Holiday Extravaganza held at the Marlboro Elementary School, I couldn't help but to think of a well know local farmer. This farmer has since passed away. He died in August of 2015. He was 87 years old. The reason I think of him is because at the extravaganza was Howard's son-in-law Shawn. We bought some beef from him. Shawn has since, with his wife Diana, taken over the family farm. Shawn and Diana sell beef and jars of jelly at local vendor fairs. In addition to their jelly sales, they sell berries to local vendors. They also sell champagne grapes to local wine makers. The farm also produces hay, and is a wonderful spot for boarding horses. Diana has three older sisters, but none of them are continuing with the farm, it's Shawn and Diana's. I believe this is because Shawn always had in interest in the farm. When he was in his teens, like a lot of young boys in the area, worked for Howard. He and Diana met then got married, had two daughters, and now run the farm. Diana and Shawn’s two daughters are in college now. Their younger daughter is now part of AmeriCorps. She is taking a very active role helping underprivileged people, living in the outskirts of Silicon Valley. What she does is to help the people make knowledgeable food choices. Living near her families’ farm apparently piqued her interest in working with food. When she is at home, even though she went to college for something non-farm related, she is always doing stuff on the farm.

I remember when I first met my husband, one of our first little dates was him taking me to the Quimby Farm. This was a little over 28 years ago. I felt like I walked into a scene from Heidi. This farm, to me, was like a piece of the Swiss Alps dropped down into the middle of Marlboro. Other people, Diana told me, think of the farm like something from Italy or Ireland, depending on each individual’s mindset. I suppose if someone visited the farm, and they were from France, they would think a piece of France was dropped smack into the center of little Marlboro, NY. The farm is very hilly with stone walls all around. There were also many old barns. Some of the barns are at least 200 years old. There were goats, cows, horses and pigs. There was even a grape vineyard way off in the far end of the farm. My husband Dave showed me where he used to go sleigh riding as a young boy with his brothers and childhood friends.

The reason my husband brought me there is because he knew Howard very well. Howard and Dave's grandfather were best friends. Paul (Dave's grandfather) had a farm across the street from Howard's farm. Later on Paul gave his daughter Kathleen his land. So, Kathleen and her husband had a house put on the land and their family lived there. Dave, like so many local boys, started to work for Howard. He baled hay, collected eggs, cleaned out the horse stalls, and let the cows and other animals go out to the pastures. One of the most interesting things about Howard that my husband shared with me is how Howard, years ago, would use mules to plow the land for farming. Howard and Paul would plow both of their fields in order to plant. Paul used to plant tomatoes. Paul was Italian, and Marlboro’s inhabitants used to be mainly Italian, so it makes sense, to me, that Paul planted mostly tomatoes. His wife Julia, my husband’s grandmother, would spend hours outside, canning tomatoes. She would use an outside hibachi to can her tomatoes. She worked outside because it was too hot inside of her house to can, at the end of the summer. 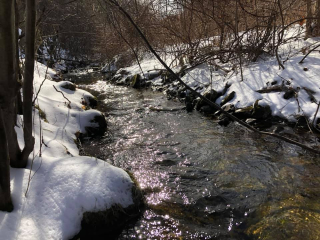 My husband remembers fondly that, in the wintertime, when Mt. Zion Road—the road he and the Quimby’s lived on—was snow covered, that sometimes Howard, his wife Phoebe, and their four daughters would ride up and down Mt. Zion Road in a horse drawn sleigh. He loved to hear the jingle bells on the sleigh. He says that the horse was so pretty with its bells and decorative garland. Even though my husband never road on the sleigh—Howard did this just for his family—he enjoys thinking about it.

My husband and I have two sons, Zack and Josh. When they were little and Zack was about seven and Josh was about four, we took them to Howard's to show them around. Howard was a pretty direct type of a person and showed us how a calf is fed. Well he showed us how the calf he had was fed. He had a female goat, and this goat was harnessed and standing on a milking stool and he squeezed the milk out of the goat. The milk must have sprayed at least five feet and the calf drank it straight from the air. This was a new sight for me and I think it's pretty funny to this day, how typical this was for Howard.

When my sons were teenagers they worked on the farm also. My son Zack only baled hay, but my son Josh baled hay, drove the tractor, picked grapes and berries, and tied grape vines, at the end of a few seasons. Josh worked there still after Howard died. So, Josh worked for Diana and Shawn. When he talks about working up there, for Diana and Shawn, I can't help but to think of the movie Napoleon Dynamite. In the movie, Napoleon works for a chicken farmer. They have a lunch break and during the lunch break the four employees, and two owners eat hard boiled eggs, egg salad sandwiches, and whisked raw eggs for their drink. All of this complete with flies swarming around. Josh did not eat an all egg lunch but did eat out in the middle of the farm. Diana ordered pizzas from a local pizzeria, and made lemonade. Then she set the pizzas and lemonade on a table in the middle of the farm. So, I picture them all out in the middle of a farm with pizza and lemonade on a table. 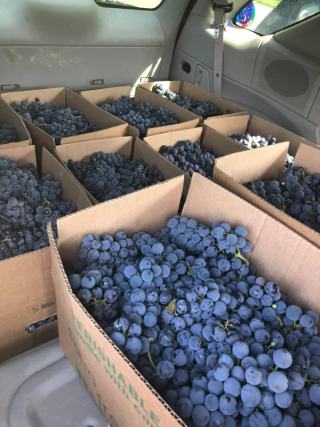 My husband and I went up to the Quimby Farm in 2014. This was at the end of October. Josh had been working there and said that Howard told him we could go up to the grape vineyards and pick grapes. It was the end of the season and his grape orders were done. We went up to the vineyard and picked a bunch of champagne grapes. I loved walking through the vineyard and picking the grapes. The smell is the best. There are many yellow jackets just like when I go apple picking, but they never bother me. I think they are so happy too—to be alive and in the middle of a grape vineyard. We picked a bunch of grapes and brought some to my mother-in-law's friend. Her friend was in a wheelchair and not able to do much for herself, so she was happy to get some of Howard's grapes. The champagne grapes are special, to me, because they are really hard to find in a store. This day was the last day I saw Howard alive. He mentioned that he had to go for an MRI for his back. He previously had a fusion, on his back, and was getting a check-up. He mentioned that he had pancreatic cancer. Then he freaked me out when he said something to the effect of his family putting him on an iceberg, and just letting him die out in the sea. It was just his sense of humor. My husband told me that he always used to say that he wanted to die with his boots on. He was also quite the salesman. He used to say, “Everything is for sale except for my wife, well I don’t know maybe I’d sell her too if the price was right.” I think like many farmers he kind of just went with the flow of things. He never seemed to take too much seriously. At least not that I know of or have ever heard of.

Perhaps his good nature came from the attitude he, I presume, had all of his life. This attitude is that of a laid back nature and thinking that whatever will happen, will happen and nobody can totally control anything. In an interview by Ivan Cash, Howard says about his farm, “I’m not too nostalgic for it. Everything comes and goes. When I’m gone, I don’t care what happens to it. I can’t take it with me and they say it’s not a good idea to control something from your death. Let my daughters do what they want with it.” Even though Howard, at the end of his life, didn’t care about the farm—I do. I am happy that I learned that Howard’s granddaughter is so interested in farming—without farmers we don’t eat.     I was surprised while learning more about the Quimby farm and Howard to find out that Howard was interviewed and photographed quite often in the past. I also found it fascinating to learn that he had a bit part in 1960, in a Marlon Brando movie, The Fugitive Kind. 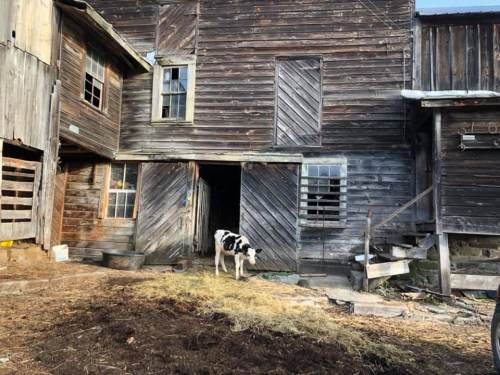 Lisa brought back a lot of memories about the farm on Mt. Zion Rd. We were fortunate to live across the way. My sons had good memories working with Howard. I'm glad they got to know him and still talk about their experiences with Howard. Thanks Lisa.