... from the Bangor Daily News: The Confederate battle flag isn’t a symbol of Southern heritage. It’s a flag of treason. by Arthur Greif

Published under Fair Use from the Bangor Daily News.
The Confederate battle flag isn’t a symbol of Southern heritage. It’s a flag of treason. by Arthur Greif 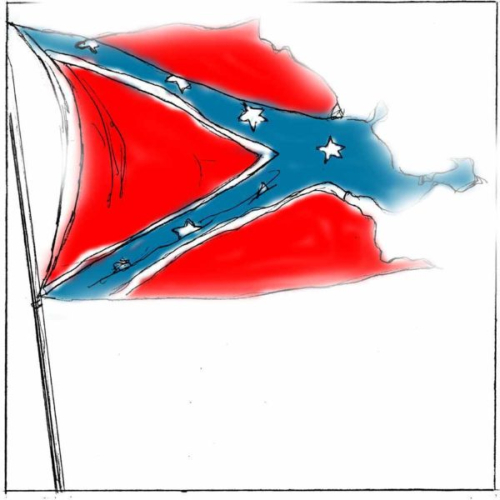 The Confederate battle flag is a flag of treason.

The Nazi flag and the Confederate battle flag were designed by groups that rejected the founding American creed of the Declaration of Independence, that “all men are created equal.” The founding documents of the Confederate States of America espoused the supremacy of the white race and the need for the black race to be held forever subservient.

While the Confederate army did not massacre 6 million people whom they considered subhuman, as did the Nazis, the Confederate army, under Gen. Nathan Bedford Forrest, a former slave trader, slaughtered hundreds of African-American troops after the surrender of the Union garrison at Fort Pillow in Tennessee. They were outraged that a black man would ever be allowed to wield a gun. Forrest, after the war, helped found the Ku Klux Klan.

Those who fly a Confederate battle flag side-by-side with the American flag are not only ignorant of history but they grossly misrepresent the core ideas that gave rise to the four years of treason that commenced with the attack on Fort Sumter. This was not, as Southern apologists claim, a defense of “states’ rights,” but a rejection of a democratic election won fairly by Abraham Lincoln. Well before Lincoln was ever inaugurated and signed a single piece of legislation, Southern states rejected the ideas of American democracy, the American nation and the American flag.

The monument to Robert E. Lee in Charlottesville, the focal point of the white supremacist rally, was not erected in the wake of the Civil War, but in the 1920s. It celebrates a man who took up arms against his own country. Monuments to Civil War generals began to be built not in the immediate aftermath of the Civil War, but only after the disputed election of 1876.

Rutherford B. Hayes defeated Samuel Tilden for presidency, even though Tilden had won both the national popular vote and secured more electoral votes than Hayes but fell one shy of the majority needed to win the election. Hayes secured the 19 contested electoral votes needed to take the White House after pledging to remove federal troops from the South, ending the era of Reconstruction.

These troops had been attempting to enforce the principles of equality and freedom over which the Civil War had been fought. This concession allowed the introduction of Jim Crow legislation, re-establishing the principles of white supremacy over which the South had committed its act of treason. Segregation and widespread denial of the enfranchisement of African-Americans quickly followed. The sudden re-emergence of the Confederate battle flag throughout the South only occurred in the 1950s as the courts, and then Congress, began undoing the legal framework of white supremacy embodied in the Jim Crow South.

The American philosopher George Santayana once wrote that “those who don’t remember the past are condemned to repeat it.” Those Southern Republicans who still defend the Confederate battle flag as a sign of “Southern heritage” and deny slavery and treason as the cause of the Civil War should remember what the first Republican president said in his Second Inaugural Address: “To strengthen, perpetuate, and extend [slavery] was the object for which the insurgents would rend the Union even by war.” Lincoln had lived the history that Southern Republicans now try to sanitize.

A little over a month after Lincoln spoke these words, he was slain by a white supremacist dedicated to the Confederate battle flag and the Confederacy, John Wilkes Booth. The time has come to squarely face the history of the Confederacy. Let us honor the Civil War dead at battlefields, but let us put an end to honoring in the public square either the flag of treason or the generals who led that treason.