Thank God for the 2nd Amendment. How Else Would The Militia Keep Us Safe? by Mike The Gun Guy™

Thank God for the 2nd Amendment. How Else Would The Militia Keep Us Safe? by Mike The Gun Guy™ 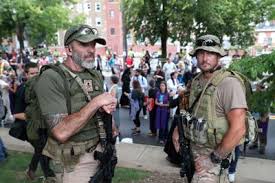 In case you’ve forgotten, the revered 2nd Amendment requires that every male citizen own a gun in order to serve in the militia and thus protect our country from harm. While of late the term ‘militia’ has become synonymous with crazy, government-resistance strategies promoted by dummies like Cliven ‘let me tell you about your Negro’ Bundy, the idea of para-military citizen’s groups defending themselves, their families, their friends and their communities remains central to Gun-nut Nation’s messaging about guns.

It just so happens that we actually possess a first-person accounting of how one of these citizen-militia groups behaved back in the good old days long before enemies of the ‘right to bear arms’  like Mike Bloomberg or Pete Buttigieg reared their ugly heads. The narrative is found in a book, The Pine Barrens, written by John McPhee. The author has been teaching writing at Princeton University for more than forty years, and has contributed more than 100 pieces to The New Yorker magazine since 1963.

To many of my readers, the Pine Barrens is associated with a great episode from The Sopranos, where Paulie and Christopher drive into the area in mid-Winter to bury a guy they have killed who then turns out not to be so dead. Their victim runs off, the two North Jersey gumbahs quickly find themselves in the middle of millions of acres of semi-wild woodlands, they end up spending the night cursing at each other inside their semi-frozen car.

What McPhee explains in his brief and beautifully-written book, is that the Pine Barrens weren’t so barren in times past. In fact, the woodlands provided all kinds of raw materials used before and during the earliest days of the Industrial Revolution, such as iron ore, charcoal and wood. But as new technologies and modern modes of transportation emerged, the villages in the Barrens began to disappear and the whole region reverted to a semi-natural state, a process still occurring in many areas that were settled in the pre-industrial period and are now lacking in human presence again.

I live less than 30 miles from an area in my state (Massachusetts) called the Monroe Plateau. The Plateau used to be a farming zone, then it saw the development of water-powered mills, now it basically supports beavers, bears, moose and deer. Walk a half-mile into the woods from one of the roads that runs through the Plateau and you better know how to get out or you won’t get out.

McPhee spends a chapter discussing life in a town called Martha, which had an industrial furnace that started operating in 1793. There were 50 houses in the town, a school, a central main house and a hospital. The town also had a militia which, according to the records studied by McPhee, enrolled all the able-bodied men in the settlement  who had to turn out for drills on something called Training Day.

The militia officers wore uniforms and ‘barked out’ orders which ‘nobody obeyed.’ In fact, according to the town register which listed all events between 1808 and 1815, the training days invariably ended up in drunken brawls. On April, 1, 1814 a militia captain named Townsend was court-martialled for being too drunk to give orders; the trial took place in Bodine’s Tavern, which was also the public space used whenever the town put any issue to a vote.

Note that the description of the militia’s activities were written while the United States was just coming out of the War of 1812. Note how what went on in the town of Martha was really no different than what happened when Cliven Bundy’s son and his buddies organized themselves into a citizen’s militia and took over the Malheur Forest Range. They sat there for a few days, ate some pizza brought up by their wives, then turned themselves in because they forgot that the building which they liberated didn’t have heat.

Whenever my friends in Gun-nut Nation extoll the virtues of a citizen’s militia it sounds rather quaint. Better they should spend a weekend tramping around and defending the 2nd Amendment in a picnic grove; at least that way they won’t get hurt.