Home Ecology Politics Creative Writing Arts Archives About Us
Thank God for the 2nd Amendment. How Else Would The Militia Keep Us Safe? by Mike The Gun Guy™
Claremont United Methodist Church Nativity Scene

McKinsey & Company: Bringing District 9 to Life for Immigrants by Marc A. Cirigliano 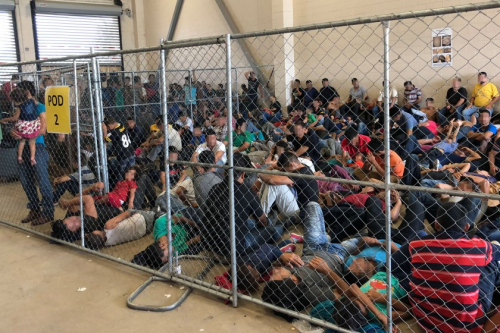 Indeed, the desire for corporate profits in the name of organizational efficeincy knows no moral boundaries. And, it appears, has little concern for human rights.

It calls to mind the treatment of the aliens in the now classic film District 9.

Just days after he took office in 2017, President Donald Trump set out to make good on his campaign pledge to halt illegal immigration. In a pair of executive orders, he ordered 'all legally available resources' to be shifted to border detention facilities and called for hiring 10,000 new immigration officers.

The logistical challenges were daunting, but as luck would have it, Immigration and Customs Enforcement already had a partner on its payroll: McKinsey & Company, an international consulting firm brought on under the Obama administration to help engineer an “organizational transformation” in the ICE division charged with deporting migrants who are in the United States unlawfully.

ICE quickly redirected McKinsey toward helping the agency figure out how to execute the White House’s clampdown on illegal immigration.

MacDougall continues that McKinsey "proposed cuts in spending on food for migrants, as well as on medical care and supervision of detainees, according to interviews with people who worked on the project for both ICE and McKinsey..."

Interesting to see the private sector, in fact, a major consulting firm with decades of experiences and a true planetary reach, jumps right in--ethics, law, morality be damned--to treat people as objects to be apprehended or moved--or, better, yet--as an infection to be eradicated. As MacDougall says, "McKinsey’s team ... three people who worked on the project ... seemed focused solely on cutting costs and speeding up deportations — activities whose success could be measured in numbers — with little acknowledgment that these policies affected thousands of human beings."

By 2015, McKinsey was also brought in to help European governments deal with their refugees from the Middle East.

Writing for the Washington Post,  Isaac Stanley-Becker explains, "Germany has paid McKinsey 29.3 million euros, the equivalent of nearly $34 million, for work with the federal migration office that began in October 2015 and continues to this day. The office also brought in two Europe-based firms, Roland Berger and Ernst & Young."

It was October 2015. With winter approaching and no end in sight to the flow of migrants seeking refuge from the Syrian civil war, Germany needed a solution — fast.

So Germany did what governments increasingly do when facing apparently unmanageable problems. It called in multinational management consulting firms, including New York-based giant McKinsey & Co., to streamline its asylum procedures.

It is no surprise, then, using a manufacturing model that treats people as objects to be acquired, reshaped and then end-processed, McKinsey sped up the process, ignored legal requirements, cut food allotments and put large numbers of people in smaller spaces.

No matter. That is manufacturing: cut time and costs.

As a friend of mine, a business professor, explained to me, students are taught this in grad school. Ignore the questions of empoyees and re-assert the changes that are to be made, be that firing people, giving them more work, or cutting their salaries. She told me that business professors in grad school stressed, "Ignore and repeat. Ignore and repeat."

The way the West is treating immigrants contradicts our most basic values. the way the powers-that-be in the West treat us is only a hlaf-step away. It is as if we are, well, prawns.

Where are human rights in these business processes?

Where is social responsibility?

Where is corporate morality?

Above all, where is the law?

Well, it seems the voices of reason have been heard in this one instance.

McKinsey is no longer working with ICE, but, as we can see on the daily news, the brutality continues.