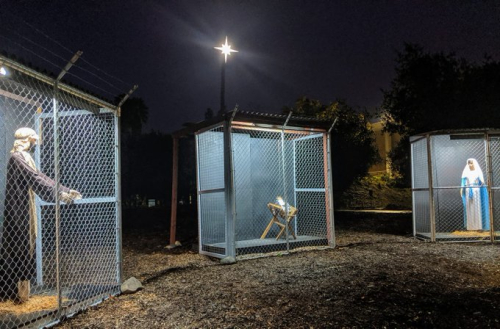 Stirred to tears by the Claremont UMC nativity. Inside the church, the Holy Family is reunited.

The theological statement posted with the nativity: In a time in our country when refugee families seek asylum at our borders and are unwillingly separated from one another, we consider the most well-known refugee family in the world. Jesus, Mary, and Joseph, the Holy Family. Shortly after the birth of Jesus, Joseph and Mary were forced to flee with their young son from Nazareth to Egypt to escape King Herod, a tyrant. They feared persecution and death.

What if this family sought refuge in our country today?

Imagine Joseph and Mary separated at the border and Jesus no older than two taken from his mother and placed behind the fences of a Border Patrol detention center as more than 5,500 children have been the past three years.

Jesus grew up to teach us kindness and mercy and a radical welcome of all people.

In the Claremont United Methodist Church nativity scene this Christmas, the Holy Family takes the place of the thousands of nameless families separated at our borders.

Inside the church, you will see this same family reunited, the Holy Family together, in a nativity that joins the angels in singing “Glory to God in the highest and on earth peace and good will to all.” Luke 2:14

The background to to this all too familiar. As Tim Stelloh over at NBC News reports:

Thousands of children, many of them from Central America, were separated from their families at the United States’ southern border after the Trump administration began criminally prosecuting every adult who entered the country illegally.

In response to a lawsuit filed by the American Civil Liberties Union, immigration authorities said in October that 5,400 children had been separated from their families beginning in July 2017.

The administration ended the practice last year, although watchdogs have said it has continued at a slower pace and sometimes under dubious circumstances.

Earlier this year, the administration launched a new effort aimed at keeping asylum seekers in Mexico while they await court proceedings in the United States.

Last week, the nonprofit group Human Rights First said it had documented 636 reports of rape, kidnapping, torture and other violent crimes against migrants who have been returned to Mexico under the program.