Home Ecology Politics Creative Writing Arts Archives About Us
All Because of Stairs by Faith Jenkins
...from Bloomberg: Middle Age Misery Peaks at Age of 47.2, Economist Says by Simon Kennedy

Christmas on the Rez by Doug George-Kanentiio, Akwesasne Mohawk

Christmas on the Rez by Doug George-Kanentiio, Akwesasne Mohawk

At the time of my birth on the Akwesasne Mohawk Territory located astride the St. Lawrence River 100 km southwest of Montreal it was overall Catholic. There were a few Methodist families and a few Mormons along with those who followed the traditional teachings, the people of the Longhouse. 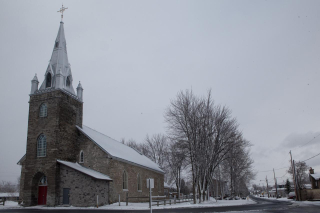 Our home was in the village of St. Regis across the street from the church, a structure built of local stone and capped with a pointed steeple. The church was built in the late 1790's after the original wooden one was gutted by fire. My paternal ancestors were among those who devoted their labour to cutting and carrying the stone from a quarry located 15 kilometers away. Some of them learned the skills of masonry, my great-great grandfather among them. It was a technical trade demanding considerable physical strength. Once mastered working with stone and mortar became part of our family's heritage. From that time my ancestors including my father and now my brothers do the repairs necessary to preserve the church.

We had a series of priests, primarily Jesuits, assigned to the parish. During my childhood, the priest was a Mohawk from the Kahnawake community near Montreal. He was a master of the Mohawk language, delivering his sermons in that language, while the service itself was in Latin. This was before the Second Vatican Council in the 1960's which introduced English into the services and had the altar turned to face the congregation.

It was expected that my brothers and I would cross into the churchyard and enter the parsonage to receive the blessing of the priest, the Rev. Michael Jacobs, to begin our tenure as altar boys. We could only do this after we had been formally confirmed and received the host at 8 years of age. Thereafter, we did minor choirs keeping the church clean, the pews clear of clutter and the job in which we strongly competed for-the ringings of the bells.

From their place high in the steeple, the two bells had thick hemp ropes from the wooden yoke which in turn swung the bells. We had to follow a specific rhythm for our pulls as the peals meant different events: steady for the mass, slower for funerals, faster, more joyous for births. The time of the day was set by the bells as was the appeal for the people to come together for an important event or an emergency. As skinny kids, we had to be careful or the counter pull using the our utmost strength might cause us to rise to the 20 foot ceiling of the lower section of the steeple.
The Catholic Church set the social, religious and political standards of the Mohawk people at that time, as it had done so for the past 200 years. But cracks were appearing in its grip upon the community. The traditional rituals were beginning to find support among a new generation who were watching the actions of Latinos and Black Americans as they were fighting suppression, poverty, segregation and the denial of their rights as human beings.

The Mohawks were sympathetic, for our people had also battled discrimination, the theft of our children, the forced relocation into residential schools and actual confinement on a small reservation which was divided by the international border and schools, which were hostile to anything resembling the truth about our history.

But for us, the altar boys, the Church represented stability and gave us status. We liked wearing the black robes and emulating the Jesuits. We also wore lace vests over red robes during Easter and Christmas. We also rang the handbells during the mass to mark specific rituals. Once we mastered the basic elements of the mass, we were entrusted with the clapper, that wooden device which made a sharp snapping sound to command the congregation to stand, sit or kneel.

Christmas was important socially, as it gave the Catholics an opportunity to do what came naturally to the Mohawks and that was to share resources, People knew which families were in greatest need and food, clothing and fuel was provided to them. The local Catholic school held a play in which the students recreated the birth of Jesus in Bethlehem to poor working parents. We made the stage sets and rehearsed for many weeks for the single performance before the village families.

Christmas trees were decorated and presents given but not to the same extant as today. More important was the midnight mass to mark the day. We would look to the skies to see if that bright, single star would appear but it never did.

The songs performed by the choir were in Mohawk with an energetic organist marking the hymns. Mohawk can be sung with happiness but one had to be careful to refrain from too much joy. Wine was consumed by the adults, although not to excess. December 25 came about after the midnight mass and the children woke to accept their gifts. The rest of the day was for visiting with every home open to guests. Arriving without announcement or forewarning was typical of Mohawk life. People followed impulse and intuition when they set out to another home and those who received them did so by giving the visitors food and, more importantly, spending hours telling stories and trading news.

Mohawk is a culture defined by oral recitation of rituals, legends and histories both familial and communal. Children were expected to be on the edge of the circle of adults and to listen carefully for the stories told as it would be their task to carry the identity of the people forward. A week after Christmas an equally important day, called Ohsiraseh took place. This was the New Year and it was cause for wide celebration, the firing of rifles at midnight and a day to be spent going from home to home where the children were given candy and the adults glasses of wine and shots of alcohol. It was great fun for the kids as they dashed among the houses filling bags with cookies, baked goods and sweet things. The trick was to avoid being embraced and kissed by adults who may have had a little too much to drink.

Much of that life has faded away. Young adults are more likely to take part in the Midwinter Ceremony at the longhouse, but most Akwesasne Mohawks remain Catholics, perhaps with less fervor than before yet the bells of the Church continue to call the Christians to return to the mass and renew their faith. 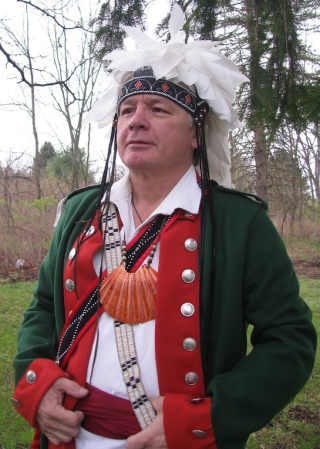