"the wildest thing I've ever heard" by ariah linville

"the wildest thing I've ever heard" by ariah linville

When I was a kid, my grandma took me for a hike in the woods, not too far from her house. That’s my grandma’s thing: hiking. I’m sure that she had been down that trail dozens of times before, but this time, it was different. 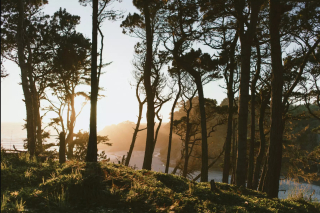 We started our hike just up the cliffs from the beach and the morning fog was still hanging around, salty and wet. The branches of the wind-sculpted cypresses that we passed under curved like the borders of an Art-Nouveau painting. As we plugged on down the path, she would pause to point out plants to me: clinging spears of Lupine, yellow yarrow, and invasive grasses that told of a legacy of early settlers. My curious young brain drank up the information like a sponge. It’s all stayed with me to this day.

After a while, I started pointing out the plants that I knew too. “And there’s another poppy.” I pointed to the flower with its tissue-thin orange petals shivering in the wind. “Did you know you aren’t allowed to pick them?” I perpetuated the urban myth. Grams chuckled at my enthusiasm. Surely she had been able to identify the state flower long before I pointed it out (five times in a row.)

Every so often we would come across a jogger, or better yet, someone out for a walk with their dog. But mostly we were left on our own with the flora and fauna of the place. Eventually, we crossed under a bridge and the landscape transformed from a windswept coastal scene, to wet riparian floodplains, then a fragrant fir forest and finally, the towering redwoods.

If you’ve never seen a redwood forest, I’m not sure that I can describe its majesty to you. Those goliaths have been there for millennia, holding hands and sharing secrets under the earth. The air itself takes on a different quality, everything is still as the morning after a heavy snowfall. Perhaps it’s the layer of needles from the trees that covers the ground. Maybe it absorbs and deadens all the sound. Maybe it’s that the trees are so thick and tall that there is no wind inside the grove. Probably though, it’s something much more mystical. Out of the corner of my eye, I imagine I might see faeries. Even the deer nosing timidly at the underbrush seemed to me vastly more otherworldly than your typical doe.

On and on we walked, through the ever-changing scenery. Past ponds, where frogs sang their songs aloud to the wetlands, and fields where mice with hind legs like kangaroos scampered from our approaching feet. It was all so enchanting, I’m not sure at which point it was clear to me that we were lost.

In childhood, we have such a belief in the infallibility of adults. My grandma was older than time, wiser than an owl, stronger than an oak tree. She hiked every day. She hiked this trail all the time, for heaven’s sake. Despite the truth of all these things, it was also true that we were hopelessly lost.

Eventually, the trail that we were following, once so broad and clear, narrowed to nothing more than a deer path. Branches grabbed at my hair as we went by. Grams held a stray tendril of thorn bush back from the path as I passed. As she let go behind us, it swung back into place, bobbing like a turnstile closing us in.

The forest seemed to come alive to me then. Suddenly it was a bit menacing, all spikes and mud. In the underbrush, I saw glistening spiderwebs and imagined their creeping inhabitants. Surely spiders don’t have as many teeth as the ones in my imagination that day did.

Soon, our narrow path dead-ended in a thicket of tangled brambles. A tunnel not even I could fit through showed us the continuing route of the deer. My grandma was now looking all around, a bit frantically. She was searching for clues to lead us back to the path. It was time for me to step up. If I was unsure before, I knew it now:

“Grams, I think we’re lost.” I was relieved when her eyes gleamed with good humor. It wasn’t too hopeless if she could still have a laugh at the little know-it-all.

We turned around and went back the way we came, past the spiders and the thorn bush. This time I was braver. I would find the way for us!

When our trail, which we now knew was little more than a deer path, opened up again, we found ourselves back in the redwood grove. Here the space was open, more expansive than the tangled oaks and manzanita that we had come out of. I circled the perimeter of the grove, searching for clues. I couldn’t even tell which way we had come from!

“Maybe this is a good time to stop for a snack.” My grandma called me back from my wandering. She fished a bottle of water and a peanut butter and jelly sandwich out of her little backpack. We sat on a fallen tree. It was covered in velvety green moss and had little white mushrooms poking out of it here and there. I was careful not to crush any of the mushrooms as I ate, but I poked at them absently with my less-sticky left pinky.

These days, I would have been eager to sit for a moment after so much walking, but back then I was full to the brim with the vitality of youth. As soon as I finished eating, I jumped up, ready to move on. We may have been hopelessly lost, but I was excited: this was a true adventure. Until now I had only read about peril such as this.

Grams helped me wash the sticky jelly off my hands in a stream that passed nearby. My light-up sneakers sank into the soft earth as I approach the water’s edge. The soil along the bank glimmered black and gold, sparking with pyrite in the low sunlight that filtered in through the leaves overhead. Water striders slid across the surface of the pool around my hands, which were now icy from the chilly water. I shivered and complained of the cold, realizing that there was less sun now than when we had first entered the grove. My grandma pointed out that it must be getting late. Bellies full and eager to be warm, we got back to business.

Near the stream, Grams noticed tire marks from a truck, or maybe a four-wheeler. We set off following them off in the opposite direction from our earlier “trail.”

We were now in the pygmy forest, which was a good sign. The trail that we were meant to be following ended in the pygmy forest. Though it was clear that we still weren’t on a trail. Usually, a boardwalk carried hikers over the boggy, acidic mud. Unfortunately, there was no boardwalk in sight. My sneakers were caked in mud: you could no longer even see the lights that illuminated with each step I took. Ordinarily, I liked the pygmy forest, everything was just my size. I assumed that it got its name from indigenous people that once had inhabited the land: pygmies. Now I know that no such people ever lived in North America, the name refers to the stunted flora of the zone.

Now and then Grams lifted me up over a particularly nasty mud puddle. We joked that it was quicksand, to step into it would surely be perilous. As the sun persisted in its downward arc and it became clear that we were still not getting much of anywhere, we decided Grams would climb one of the little trees and see if she could get us out of this mess. I gave her a boost up to the first branch and from there it was an easy climb.

Her head swiveled around and around as she scanned the treetops for clues. I couldn’t tell if she could see anything at all.

Down on the ground, a movement along the treeline caught my eye.  Loping through the wild tangle of branches and lichen came a creature that I had only seen in pictures. It was a mountain lion, low and lythe. Her shining golden tail flicked as she prowled in a circle around me. Somehow, I don’t remember being afraid. I felt a deep sense of calm, with a touch of curiosity. After taking stock of me, she faced me squarely. Her big round amber eyes held me in their gaze.

“You’re lost.” She explained, as though I wasn’t aware. Her voice was the wildest thing that I had ever heard, like a growl and a melody.  “No cubs come to these parts.”

I considered her tentatively. Sure, I had talked to plenty of animals before. This was just the first animal that had ever talked to me. I decided that I could trust her and my emotion came spilling out.

“Oh, we are lost!” I exclaimed in exasperation, throwing my arms around her neck and burying my head in the velvet of her chest as I did with my own pets. “Lady Cat, how do we get home?” I was near tears by now. The sense of adventure was waning, I was cold, tired and muddy.

Though she seemed taken aback by this display, the cat did not shake me off. She gazed out into the forest intently, as if seeing all the paths laid out. She explained to me that I must follow the left-most route.

“If you take every left that you come to, you will soon find your trail again.” I thanked her with a kiss on the soft, wide bridge of her nose. She merged back into the scenery of the forest. I’ll never forget the warm smell of her fur, or how very right it felt to embrace her. I’m sure that the mountain lion saved our lives that day.

As my grandma climbed down from her watchtower, I took her hand and told her I knew the way.

When we finally made it home, Grams told everyone the story of how we got lost in the woods.

“Ariah’s the one that got us out!” She told them all with a proud smile.

“That’s only because the mountain lion told me the way.” I brushed aside the recognition: for once, I didn’t need to be the one to know everything.

Everyone laughed, but I didn’t care who believed me. And I still don’t.