Home Ecology Politics Creative Writing Arts Archives About Us
SEARCHING FOR SHENANDOAH:  10,000 MILES, TEN SONGS, TENTACIOUS LESSONS FOR A TROUBLED AMERICA
The Buzz on the Honey Bees by Patty Marasco 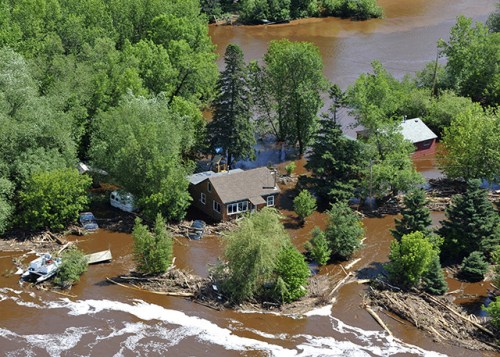 As we had written a few weeks ago in The Eastern Woodlands Fusion, "If you live near one of the Great Lakes, you no doubt have seen lakeside property owners up in arms about the high water levels, with some of them experiencing serious property erosion and, in some cases, being out-and-out flooded with serious damage to their homes."

As we pointed out, "The Great Lakes Integrated Sciences and Assessments Program (GLISA) has found, 'since 1900, total annual precipitation has increased by 11% in the U.S. Great Lakes region.'"

That is a lot more water than we Great Lakers are used to.

In a follow-up article we reported that Great Lake levels were not going to see any immediate relief from flood-like shorelines:

Writing for the Detroit Free Press, Keith Matheny says, "It appears 2020 won't bring relief from high Great Lakes water levels – and they could be even higher than this past record-shattering spring and summer."

The following graphic explains the scenario: 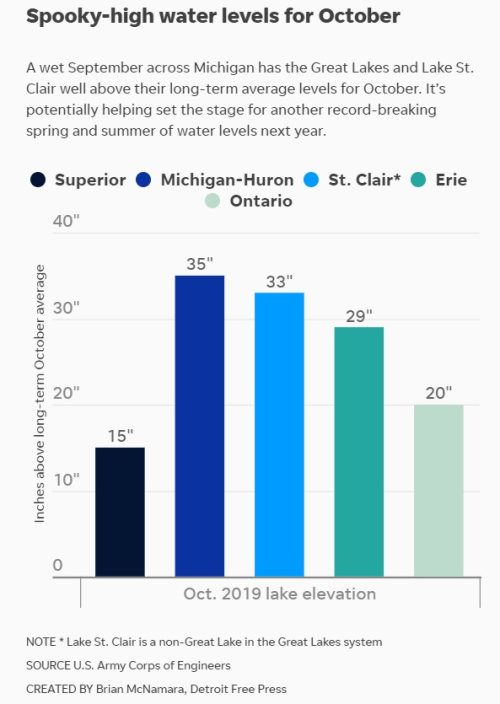 This week, we have Ron Meador writing about Lake Superior for MinnPost:
Now the lake and its shoreline communities are experiencing a series of climate impacts that run queasily parallel to the problems of saltwater coasts that have become familiar in recent decades: storms of unusual fierceness and destruction, intensifying rainfall patterns, accelerating coastal erosion and infrastructure losses, overwhelmed wastewater treatment systems, icky (and potentially harmful) algal blooms.

Meador tells us that long-time journalist Peter Annin, author of “The Great Lakes Water Wars” and director of the Mary Griggs Burke Center for Freshwater Innovation, gave the members of the International Joint Commition, the IJC, a report in which he said that Lake Superior's south shore region may now be in a “new normal” phase of climate and weather patterns.

So, the "new climate" of Lake Superior produces the flooding that we see in the above photo. It now has the following three problems, which, because all the lakes in the system are connected, are now problems for the other Great Lakes:

This is our new Lake Superior. It is also our soon-to-be new Great Lakes reality.

A glass of asbestos tainted water, anyone?