Home Ecology Politics Creative Writing Arts Archives About Us
Ah ... the Cleveland Browns ...
Decision Making in Our Times of Environmental Stress by Marc A. Cirigliano

Reprinted from NBC Sports through Fair Use. 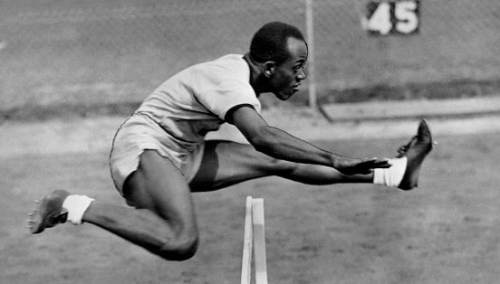 Harrison Dillard, who was the U.S.’ oldest living Olympic champion, died after battling stomach cancer at age 96 on Friday, according to the U.S. Olympic & Paralympic Committee and USA Track and Field.

He also won 4x100m relay titles at each Games to match the career gold-medal total of Jesse Owens, whose victory parade in Dillard’s native Cleveland proved an inspiration for the 13-year-old.

“Some of us youngsters were standing on the curb when he came by in this open black car,” Dillard said, according to The New York Times. “He was wearing a black suit with pinstripes, and he said something like, ‘Hi, boys.’ I ran home and said, ‘Mama! Mama! I saw Jesse Owens, and I’m going to be just like him!’ She said, ‘Of course you are, son.’

“She didn’t take it seriously then, but later when she saw how much it meant to me she went out and cleaned other people’s houses and did their laundry and cooked for them so she could buy a little more food to build me up.”

Dillard began hurdling earlier at age 8 — in an alley and using abandoned car seat springs as barriers, according to the International Olympic Committee.

“As inner city kids in Cleveland,” Dillard said, according to the Times, “we had three idols — Owens, Joe Louis and Henry Armstrong, who held three boxing championships. I wasn’t a fighter. I tried boxing, but every time I caught a jab my nose bled. In sandlot football I was fast enough to run with the ball but too small. I was a good baseball player; I could pitch and play shortstop and the outfield, the way all kids do, and I was a switch-hitter. But this was before Jackie Robinson, when there was no place for blacks in baseball.”

Dillard, nicknamed “Bones” for being slender, served in World War II in Europe as a member of the Buffalo Soldiers, African-American troops who fought in Italy from 1943-45, according to the OlyMADMen.

Three years after the war, Dillard returned to Europe to compete in the 1948 London Games, but not in his primary event.

At trials, he had an 82-race win streak in the hurdles snapped, failing to finish.

“I hit the second, third, fourth and fifth hurdles with the heel of my leading foot, and by the eighth my timing was off so bad that I finished last, the only time I ever did,” Dillard said in 1979, according to the Times.

No matter, he had placed third in the 100m at trials and then pulled off the upset for the Olympic title by outleaning countryman Barney Ewell in 10.3 seconds.