Years before cell phones would have Global Positioning Systems that you could hold in your hand or cars would have built in screens with GPS nearly as large as the TV I had in my childhood bedroom and more right there next to your steering wheel, my mother lent us her window mount style GPS. 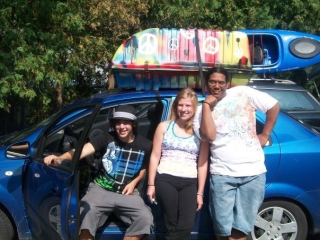 Two summers previously my older sister Laura and I named this particular GPS Carmen after mistakenly reading the name brand insignia as such instead of GARMIN. At the time we were horribly lost going the wrong way down a one way in the middle of Boston's big dig on our way to a Roger Waters concert.  Not unlike that evening it seemed as though Carmen was trying to kill us again. This time I'm not with my sister, instead I’m with my boyfriend Travis and our roommate Macho. We’re driving my bright blue Chevy Aveo we call the little blue beep with a tie-dyed peace sign adorned hamburger bun style box top almost as large as the car itself strapped to the top. We are nowhere near Boston now; we’ve found ourselves hopelessly lost outside the badlands in South Dakota with a useless if not malicious GPS named Carmen.

Bumping down a dirt road Carmen firmly tells me to “turn left, here.” Looking out the window on my left I can see straight down for easily thirty feet. “No thanks” I say out loud, “I think this bitch is trying to drive us off a cliff.”

I turn on the first road we finally come to, a right.

At this point Carmen has launched a near continuous verbal onslaught of “recalculating” nearly interrupting herself with the urgency of the next recalculation. 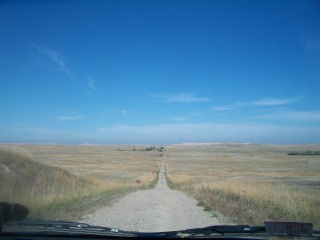 Suddenly, “Turn Right Here” and if I didn’t know better I’d say her inflection was desperate and demanded a reaction now. I turned right and as I drove down this new road it disappeared, disintegrated into a corn field or wild grass I can’t recall now only because the memory of the assaulting grasshoppers, like their numbers, overwhelms me, as they did my car. Screaming at my passengers to “roll the fucking windows up” as I somehow simultaneously did so myself in a car that did not have the modern luxury of push button window controls but instead demanded numerous cranks of a plastic handle; its construction of such inferior quality I’m afraid my vigorous turning will break it, while throwing the car into reverse and careening through the field backward to escape what I was sure was the first of the seven plagues.

Returning to Bombing Range Road, which compared to the field we were just driving through now seemed suddenly more modern, we come to an intersection, straight ahead is a store, right out of a western film except for the neon “open” sign that flickered in its windows. The open sign, barely clinging to life was the only sign of life, all the windows were darkened with plywood or heavy wool blankets nailed over the glass.

Macho asks me to pull over, so he can buy something at the store. I keep on driving, overwhelmed with a genuine concern for his life. His jet black thick curly hair went well past his shoulders and out in every direction from his head if not pulled back into a pony tail or tightly braided and his skin was a deep brown—just a few days ago he had become upset that there was too much sun at the beach and he may get even darker. I had been sad he let the way others may perceive his sun kissed skin inhibit him from enjoy the beach at the time but in this moment I was glad he was only as tan as he was. I keep driving wishing we hadn't so naively spray painted our box top. I’m pretty sure we aren’t the kind of folk that would be welcomed here.

An hour or so past the store we came to another intersection. It’s mid-day and we can see for countless miles in all four directions—despite this, we see nothing except for a quartet of auburn horses.

“Yo, what’s up, can you tell us how to get to the highway?” Travis asks of the horses that don’t raise their heads to notice. Macho says, “Maybe they don’t speak English”

Thinking for a moment Travis says “okay” and leaning out the windows towards the horses elevating his voice just a bit “HOLA! ¿Donde esta? 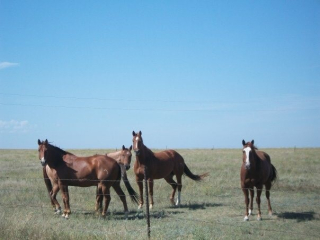 In unison the four horses raise their heads and look at us in response.

I snap a photo with my digital camera.

Not that it helped us solicit directions from them at all. None of us speak Spanish well and they’re horses so even if they understand our broken Spanish attempts, they offer no information in either English or Spanish.

The road gradually widened and suddenly we came to an intersection

“Turn Left Here” Carmen said and we did with the little blue beep feeling some relief as its tires climbed the little bump onto a recently paved road. We drove through the night. Sometime just before dawn with the faintest light rising in the rear-view mirror, an owl, it’s wing span as wide as our car, dives toward our windshield in some crazy attempt to play a game of chicken and although he pulls up before hitting the windshield he is killed instantly by the hippie box on the roof. Ironic I think to myself and let sleep find me.

In the morning we stopped for gas, check the box top for possible damage and took note of the carnage on the front of our car, pieces of grasshoppers sticking out of the grill and their splattered remains plastered to nearly every surface. I use a window squeegee to wash the car. A great story of adventure, told with humor , insight and, grasshopper attacks.
Thanks!