Here you have it in the accompanying photo, the great John Wooten, left guard of Paul Brown's Cleveland Browns, leading the great Jim Brown on one of the Brown's vaunted sweeps. 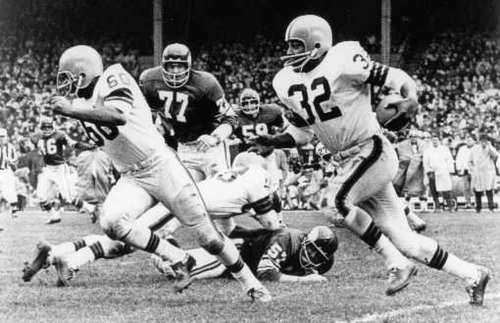 That was when the Cleveland Browns were a respected and feared team.

Paul Brown, ever the innovator, had a crisp and tight squad, very much in the vein of today's New England Patriots. Power, speed and, above all, execution.

That is what I remember going to the old Municipal Stadium on Lake Erie to see the Browns. The game was played on natural turf--yes, grass and mud. The wind, from mid-October on into December, whipped in from Lake Erie, often with rain and, later in the season, snow squalls.

Now, THAT was football!

The Browns have, indeed, fallen over the decades.

I remember taking my young wife and mistakenly sat in part of the Dawg Pound back in 1980. They were cheap seats and we did not have a lot of money. We left before half-time. Seriously, losers with no shirts swilling beer and, I guess in their own way, gettin' nasty with all sorts of vulgar behavior.

It just wasn't, as far as I was concerned, up to Paul Brown, John Wooten and Jim Brown standards.

I mean, where is the football in acting in a loosely synchronized public cacophony of obnoxious assholish behavior?

Well, the public jack-off-ery went beyond the Dawg Pound last night with merely 8 seconds left in a game Cleveland was about to win. Browns team captain Miles Garrett slammed Pittsburgh Steeler quarterback Mason Rudolph into the ground, then took off his helmet and slammed it, hammer-like, into Rudolph's head.

Indeed, I left the Browns years ago and now can see that I made the right decision.