A Taste of Home by Fatima SadeghiMohamad

A Taste of Home by Fatima SadeghiMohamad 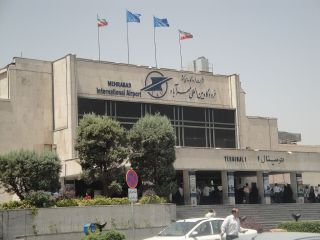 Every summer I would look forward to seeing the thin white wooden doors with the stained glass as we rode up the hill and into the wide street of my grandparent's home. While I sat in the taxi getting to their house from the Mehrabad International Airport, I always thought of the fresh red and pink roses my grandfather planted in the front yard and the delicious spinach curry and saffron rice my grandmother usually prepared for me. An unexplainable sense of delight would overtake my young twelve-year-old heart, sitting in the taxi, thinking, squirming, and wiggling in my seat, counting the minutes and seconds left until my grand entrance into their home.

Getting to my grandparent's house took about one hour and a half from Tehran's airport. My maternal family lived in Qom, a sacred city in Iran. Between Qom and Tehran is a long-abandoned desert and it mostly remains that way 'till today. There were no trees planted along the way, only a paved road that had an occasional high-mast lighting that flickered so much it barely gave light.

As my parent's chit-chatted with the driver about current affairs, I would crank down my window, being careful not to open it too far and get flopped in the face by the dry hot air. Then, very carefully, I focused my attention on spotting the green strings of light in the midst of the darkness that swallowed the roadway. They would faintly be seen from afar when we would grow closer to the city. These lights were the welcome sign to Qom and I knew it would then be only a few minutes to reach that familiar place I called my second home.

My grandparents were a very sweet couple who were loved and respected by everyone living on the street. They owned a sheep, a goat, and some chickens and would share what they could from milk and eggs with their neighbors. The backyard to their house was small and rectangular in shape but it was always full and sort of smelly from the animals. Every nook and cranny was used either for planting or storage, they certainly knew how to utilize small spaces.

My grandmother loved to plant, and cooking was her hobby, so any herb you desired was found in her many colorful pots that laid straight in a row. During mid-summer, her ripe, red, tomatoes would be ready to devour along with her reputable figs from her fig tree which my grandfather detested, but kept for my grandma's sake. Her fig and pomegranate trees which she managed to grow in their small rectangular backyard were very dear to her as they were planted by her own mother when she initially moved into her house many years ago. My grandparents house wasn't too big, although, as a child, I thought it was a palace full of adventure and treasure that needed to be discovered. Stepping through the white doors their were two sets of stairs. One, that led up into the first floor, and the second, down into the basement. My grandfather always sat at the doorway of that house during the late afternoons and gazed at the sky as nightfall would near. After it would get somewhat dark he would walk down their wide busy street, full of young children playing, running, and singing and into the main road where there were three stores, a bakery, a yogurt maker, and a Shirini (dessert) maker. In the bakery, the bread maker would have just finished baking fresh bread called Nan Sangag and Barbari, two most traditional breads found in Iran that were cooked on stone and another in a Tanoor, or, a bakehouse. He would bring back with him a couple of rounds of steaming hot bread which he covered with a cloth to keep it from drying. Almost all the time one round of the twelve pieces of bread would be missing which he ate on the way and would share with me when I tagged along.

Upon reaching home, I would smell the sweet aroma of sautéed meat with fresh greens from my grandmother's garden. I run into the kitchen smiling gleefully and presenting the bread to my mother who stood beside my grandmother helping her prepare dinner for the family. My grandmother's kitchen was very basic. Even though after her garden, this was her second favorite place in the house, she kept it very simple but extremely neat.

The kitchen was also a rectangular shape, but much smaller in width than the backyard. Their was a steel sink, a small row of bottom cabinets made of metal but painted white. There were no upper cabinets, but my grandfather had put up some racks for my grandmother to place her daily used dishes. On the other side of the wall was a long pantry with dark brown wooden doors. Here my grandmother stored dry goods as her spices of many colors and flavors, teas, saffron, rice, and dried herbs. If theirs anything Persians love it's their dried herbs, my grandparents would say! Beside the pantry was the fridge. It was very old, almost resembled an icebox I once saw on an episode of I Love Lucy. It would aggravate my grandmother as every month she would have to de-freeze the fridge as it built up ice everywhere inside.

From the kitchen, I would step into the only living room in the house. This room was the widest and most favorable among everyone. Here, and on the floor, as was tradition, was where the meals were eaten and teas sipped from traditional Persian porcelain teacups. 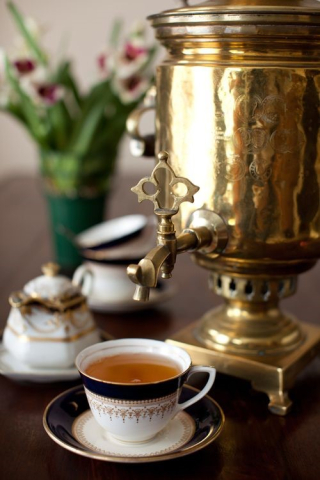 On the tiled floor, their lied a beautiful Persian rug, made by hand in Shiraz, a city far from Qom that is very famous for rug making. Men and women of all ages hand make rugs in Shiraz creating a plethora of designs weaving in many different threaded colors. There was a box t.v. in one corner that was mostly unused and covered with a triangular white laced cloth. My grandfather usually listened to the news on his radio while he sipped tea which he poured out from his Samawar and sucked on sugar rocks.

Laughter and happiness usually filled the air in this room, up until the day my grandfather died. The happiness of this room equaled then the pain that it later brought the day my grandfather's heart stopped beating and devastated my entire family. The home that once was full of cheer with the occasional drama sessions, turned into sorrow and depression. Never again was this home and this street an embodiment of pleasure and safety. My grandfather seemed to take all the joy with him.

Walking the streets of Qom after his passing was very painful thereafter. At seventeen years of age, I still remembered the many outings we shared and the sweet memories their street, Poonak 78th Street brought. Mr. Wahidi, the baker, often ushered me into his store, which usually had sacks of flour piled under the long metal table assembled in front of his store. But I always waved back, from afar, afraid of walking too close and smelling the delicious aroma of fresh bread and rolled dough.

At Twenty-five, I stood across the same street, while motorcycles swished by into their alley, as a majority of the residents didn't own cars. I would stand frozen, staring, into that familiar wide street with unfamiliar houses now. The yellow bricked buildings had been torn down and apartment buildings stood instead with signs of "For Rent" labeled across them.

At that moment, and on that special day, as I like to think of it, a light breeze blew across my face. Involuntarily my feet began to move swiftly across the pathway and towards the crosswalk. There were no traffic lights but all the signs of cars, buses and motorcycles had disappeared. Mr. Wahidi raised his head while handing a customer Barbari and saw me coming towards him. He took off his floured apron, wiped his forehead and came out back to meet me by the corner where my grandfather stood to talk to his friend every late afternoon.

"Fatemeh, how are you?" he said softly hardly believing that I had crossed the street.

"I'm okay, thank you," I replied choking on my tears that eventually rolled down my cheeks as quick as a waterfall, unwillingly.

"Wait for a second," he said, after handing me a tissue he took out from his pockets. He went into the bakery, the only store that was unchanged, and came back holding a piece of bread.

"For old time sake?" he said, handing me that freshly baked bread with sesame on top. I didn't want to take it, but something pushed me to accept it.

I took the slice of bread, thanked Mr. Wahidi and found myself walking up and into 78th Street. The street was much cleaner, I had immediately noticed. There had been roadwork done to fix the crooked path that I used to jump over as a kid. The aroma of dinner being cooked from every house filled my heart with a certain joy that took me back to grandma's cooking, some things never change, I thought.

I trembled as I neared the brick houses that were stuck very close to each other. Yellow, red, yellow, and finally the white doored one. There was dust collected on the front step of my grandparent's house which I cleaned with my shoe. I placed my hands over the stained glass and went over every outline of the flowers embossed within it.

Suddenly, a child ran up to me, about eight or nine years of age.

"Miss, do you need something?" she asked me. "My parents aren't home yet."

"Yes, Miss, with my grandparents and cousins," she replied smiling brightly.

I turned to leave when I suddenly noticed the rose bush. I walked to the bush and plucked the prettiest red rose I saw. I turned to the little girl and asked, "I planted these when I was about your age, do you mind if I keep this one?"

"You can keep it, Miss," she replied.

I turned around and started to walk back holding my rose tightly against my chest. I ushered a taxi and gave him the new address where my grandmother lived now. I smiled, smelled the rose and took a large bite of the delicious bread. I looked towards the bright road ahead and waved to Mr. Wahidi as we turned to the main road. Today is a beautiful day, I repeated to myself throughout the way, today sure is a beautiful day.