Trump Fails His Oath of Office: Shattering the Promise of the Constitution’s Preamble

Trump Fails His Oath of Office: Shattering the Promise of the Constitution’s Preamble by Marc A. Cirigliano 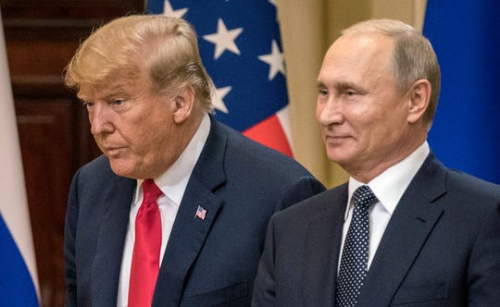 Trump has failed his Oath of Office.

He has not, as the Oath states, carried out what he swore to do:

He has neither executed the office of the President, nor preserved, protected and defended the Constitution.

Let us look at the Preamble of the Constitution, as a series of examples.

Trump’s failure on the fundamental goals, the intention, of the Constitution, the Preamble, is epic, except that epic connotes something, well, on the good side of the fence, something heroic. In that sense, Trump has been, during his entire public life, notorious,; that is, widely and unfavorably known. So, his failure is much less epic, but notorious more describes his persona, not the totality of his actions as President.

Then, we have disastrous. And, disastrous may not be quite right since he deliberately aims to hurt people and disaster always has a component of chance, of fate, rather than totality of human intention.

So, his failure may be malevolent.

Yes, this is it: wanting to cause harm to others.

Let’s look at Trump, then, through the lens of the Constitution’s Preamble.

We the People of the United States, in Order to form a more perfect Union, establish Justice, insure domestic Tranquility, provide for the common defense, promote the general Welfare, and secure the Blessings of Liberty to ourselves and our Posterity, do ordain and establish this Constitution for the United States of America.

Let’s break this down into specifics and give Trump a grade for each:

Racist, sexist and anti-disability speeches, statements and Tweets demean people and, as well, are divisive, setting Americans against each other.

Disregards the conventions of the Constitution, the rules of the Presidency and Federal law. He also shirks at any evident wrongdoing proved against members of his administration in a court of law.

Promotes violence against minorities, LGTBQ people and people who oppose him. He goes as far to talk of “civil war” if he is held accountable through the enforcement of Federal law and the Constitution’s impeachment process.

Trump and his large business/political circle have demonstrated ties to Russia. He refuses to stop Russian interference in our elections, actually encourages it, and asks foreign leaders, all dictators, to find “dirt” on his political opponents. Moreover, he has attempted to destroy many beneficial multi-lateral treaties and arrangements that benefit the US safety, security and influence in the world.

Tax cuts for the wealthiest, elimination of environmental regulations, opening national parks to logging and mining and drilling, attempting to dismantle public education and wanting to cut medical and food stamp aid to the poor harm the quality of human life, the long term viability of American society and indicate a lack of humanity.

Attempts to censor the independent press, talks of establishing a state run media organization, talks of locking up political opponents, attempts to intimidate alleged enemies who he labels as “losers,” and, perhaps most importantly, repeatedly asserts that he is above the law and can do whatever he pleases.

Trump brings to mind two characters. One is historical. The other, fictional.

This historical character is the Ancient Athenian stateman Alcibiades, who was famous for betraying his own people several times during the Peloponnesian War, if it served his personal interests. Given that Athens lost the Peloponnesian War to Sparta, this was a pretty big deal. It’s also one of the negative character studies in Plutarch’s Lives, where one severely flawed, immoral person is contrasted with an opposite and moral one.

The fictional character is Shakespeare’s King Lear, the aging mad king who catastrophically divides his kingdom into two, giving two of his three daughters, Goneril and Regan, each a piece, while choosing to ignore his most faithful daughter, Cordelia, because she refuses to flatter him mindlessly as the other two do. Sound familiar?

Yes, he reminds us of Alcibiades and Lear, minus Alcibiades’ handsome looks and silver-tongued eloquence, and, this goes without saying, but I’ll say it, anyway, minus Shakespeare’s brilliant writing.