The Big Boys of Finance Want to Fight Climate Change!

The Big Boys of Finance Want to Fight Climate Change! by Marc A. Cirigliano 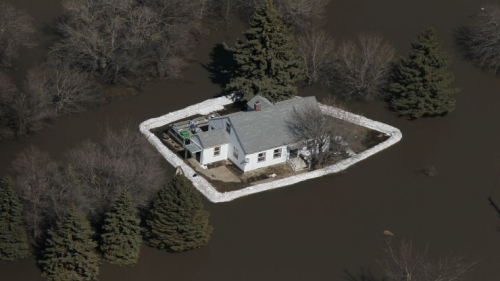 A house is surrounded by floodwater from the Red River on April 11, 2011
near Fargo, North Dakota. Scott Olson | Getty Images (from CNBC)

As Bloomberg points out, "The Great Climate Retreat is beginning with tiny steps, like taxpayer buyouts for homeowners in flood-prone areas from Staten Island, New York, to Houston and New Orleans — and now ... Marathon Key. Florida, the state with the most people and real estate at risk, is just starting to buy homes, wrecked or not, and bulldoze them to clear a path for swelling seas before whole neighborhoods get wiped off the map."

Bloomberg continues on, "By the end of the century, 13 million Americans will need to move just because of rising sea levels, at a cost of $1 million each, according to Florida State University demographer Mathew Haeur, who studies climate migration. Even in a “managed retreat,” coordinated and funded at the federal level, the economic disruption could resemble the housing crash of 2008."

As Diana Olick of CNBC reports, "Risk is rising exponentially in the age of climate change. To that end, big real estate firms are pouring significant resources into calculating climate risk and its likely effect on property portfolios — everything from increasingly extreme weather to a rise in sea levels."

Olick continues with Urban Planning Institute or ULI’s CEO, Edward Walter, “Risks such as sea level rise and heat stress will increasingly highlight the vulnerability not only of individual assets and locations, but of entire metropolitan areas.”

Dion Rabouin and Ben Geman over at Axios write that a new climate consensus movement is going forward without the US, since "President Trump yanked the U.S. out of the Paris climate agreement and his administration announced "climate change will not be on the agenda" at the June G7 meeting."

On the ther hand, the rest of the world, especially major financial institutions are getting on board with fighting climate change.

Rabouin and Geman tell us that "The world's top economic institutions are going deeper in the fight against climate change, and central banks are re-evaluating policies and pushing new principles to integrate climate-related risks into financial supervision, leaving the U.S. behind."

Rising sea levels, changing weather patterns, more extreme weather events and flooding where there previously was much less sounds like a recipe for disaster.

Every year, more CO2 in the atmosphere.

Let's hope the big money can help us turn spaceship earth around.