Home Ecology Politics Creative Writing Arts Archives About Us
Symphony of the Songbird by Thresa Clinton
Can We Ever Get Off Fossil Fuels?

Some good, but some really bad news in the Eastern Woodland waterways.

On the good, the dolphins and trout have returned!

In Lake Michigan and the other Great Lakes, the Freshwater Bottlenose Dolphin is on the rise. As  Mike Murphy, a scientist with The Great Lakes Fish and Water Quality Society has said. “This is really exciting, environmental protection laws enacted in the 1970s are working. We are going to send a team out on the lake next week to track the dolphins, see where they are mating, and their diet. This could be a boost to the lakes natural ecosystem.”

The dolphns have been spotted in Lake Michigan from Mackinac Island down to the dunes of Indiana. 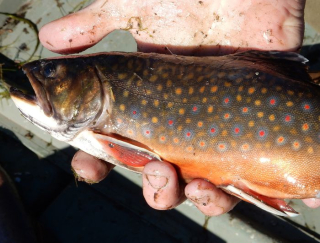 Even more good news on water creature front, in Lake Colden, near Keene, NY, the gradually improving water has enabled the trout to return.

As the AP has reported, "A reproducing population of brook trout has been discovered in a tiny lake in the Adirondack High Peaks Wilderness for the first time since the lake was declared fishless because of acid rain 32 years ago, New York state officials said."

The New York State DEC said, "It's the first time a non-stocked, sustaining fish population has been recorded in a high-elevation Adirondack lake previously determined unable to support fish due to acid rain impacts."

This was a long-standing problem, for acid rain "was causing tree die-offs in higher elevations of the Catskills and Adirondacks and had made hundreds of lakes and streams too acidic to support fish."

On the bad side, the CBC reports that over 100 municipalities in have been dumping raw sewage water into Quebec's waters. 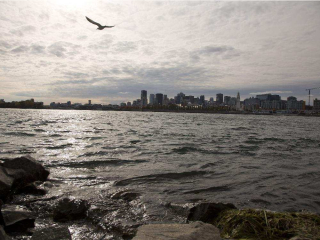 As the Montreal Gazette reported last November, "Montreal’s eight-billion litre sewage dump into the St. Lawrence River, which made headlines in the New York Times, Paris Match and on Erin Brockovich’s Facebook page, and was delayed three and a half weeks by a federal government mired in a national election campaign, began Wednesday morning just after the stroke of midnight.

In what sounds like an SNL or Daily Show news parody, the Gazette writes, "Residents are asked to do their part by not putting things like diapers, condoms, feminine hygiene products and syringes into the toilet."

Indeed, in the Eastern Woodlands, we pay taxes, put up with the meandering bullshit of all of our forever-promising politicians and watch endless TV ads about how buying some corporate product is going to make life better.

And we end up with sewage dumped in our waterways. Putain de con!