Climate Change and the Increase in Disease

Climate Change and the Increase in Disease by Marc A. Cirigliano 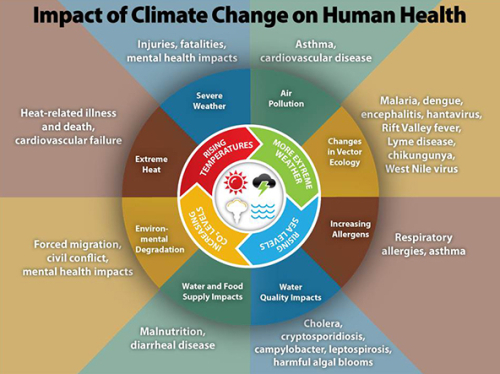 "As the globe warms, mosquitoes will roam beyond their current habitats, shifting the burden of diseases like malaria, dengue fever, chikungunya and West Nile virus. Researchers forecast different scenarios depending on the extent of climate change," so reports Rob Jordan from the Stanford Woods Institute for the Environment.

"Mosquitoes and other biting insects transmit many of the most important, devastating and neglected human infectious diseases, including malaria, dengue fever, chikungunya and West Nile virus. Economic development and cooler temperatures have largely kept mosquito-borne diseases out of wealthier Northern Hemisphere countries, but climate change promises to tip the scales in the other direction," Jordan writes.

Plus, there is, given the fact that the environment in an interrelated system, the problem of one climate change factor triggering other negative effects, as well.

Extreme weather events can produce a cascade of other effects that influence disease. Heat and droughts create dry conditions, providing fuel for forest fires that end up fragmenting forests and driving wildlife closer to humans. Droughts and floods affect crop yield, sometimes resulting in malnutrition, which makes people more vulnerable to disease while forcing them to find other food sources. Flooding can provide breeding grounds for insects and cause water contamination, leading to the spread of diarrheal diseases like cholera. Moreover, extreme weather can disrupt the finely tuned relationships between predators and prey, and competitors that keep pathogen-carrying pests like mice and mosquitoes in check.

Tanya Lewis of Scientiic American warns "climate change is making such extreme weather more common." And with that, "warming temperatures do not only threaten lives directly. They also cause billions of hours of lost labor, enhance conditions for the spread of infectious diseases and reduce crop yields, according to a recent report."

Lewis says Nick Watts, executive director of the Lancet Countdown, tells us what we already know, but it's good to hear it reinforced, anyway: "Among the biggest steps countries can take to mitigate these health effects are phasing out coal-fired power and shifting to greener forms of transportation."