"PG&E announced plans on Saturday to turn off the lights in 940,000 homes and businesses throughout 36 counties in Northern California for 48 hours or more, in an attempt to prevent more wildfires," Gigi Sukin reports for Axios.

Why the deliberate power outages?

PG&E is shutting off the power to prevent sparks from downed power lines from igniting vegetation dried by the past decade's droughts. 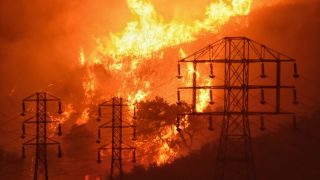 As Michael J. Coren writes for Quartz, "The utility is shutting off the power."

The blame seems to go both ways. PG&E is accused of neglecting its infrastructure, while climate change, unabated because of all of us, causes droughts.

Coren explains, "PG&E, accused of neglecting its infrastructure and the flammable vegetation near its power lines, faces forests left tinder-dry by a series of brutal droughts in the past decade. As the climate dries out the West, wildfires are burning hotter, longer, and bigger than before. Overwhelmed, the utility has decided its only strategy is to stop delivery of its essential service to millions."

Can you blame PG&E?

Droughts are beyond their control. As are higher winds caused by warmer temperatures that down power lines.

"Frequent fires are part of California’s natural state. Many of its ecosystems, from the chaparral of Southern California to the northern pine forests, evolved to burn frequently. But since the 1980s, the size and ferocity of the fires that sweep across the state have trended upward: Fifteen of the 20 largest fires in California history have occurred since 2000. And since the 1970s, the amount of area burned in the state has increased by a factor of five," explains Alejandra Borunda of the National Grographic.

And, it is getting significantly warmer in California.

"Over the past century, California has warmed by about 3 degrees Fahrenheit, more than the global average of about one degree Fahrenheit. Hotter air draws water out of plants and soils more efficiently than cool, leaving the trees, shrubs, and rolling grasslands of the state dry and primed to burn," reports Borunda.

Michale J. Coren gives us a picture of a future from into the coming decades:

We’re entering a climate era when there are no total solutions. There are only tradeoffs. Disaster relief is becoming less about rebuilding or fixing infrastructure, and more a way to buy time or retreat from the hardest-hit areas. In low-lying and fire-prone areas, communities are already beginning to abandon their homes,  from Alaska to Louisiana. As the cost of defense and rebuilding after climate-driven disasters becomes too costly, exceeding the ability of even insurers and governments to absorb, this will become the new normal. Just defending coastal cities against storm surge with seawalls will cost at least $42 billion by 2040, according to environmental group the Center for Climate Integrity, and as much as $400 billion if including communities with less than 25,000 people.

Writing in The Atlantic, Robinson Meyer concludes, quite aptly, "I sometimes hear politicians rosily speculate that we’ll adapt to climate change and rising temperatures. And we will, somewhat, especially if we limit carbon pollution and the ensuing scale of global warming."

This is true. If we limit carbon...

But, Meyer continues on, "But until the federal government invests serious money in retrofitting American infrastructure—and preparing it for the climate to come—then “adapting to climate change” will mean skipping your kid’s soccer game so you can be the 26th car in line at the Exxon."

As we pointed out in a previous article on The Eastern Woodlands Fusion, Can We Ever Get Off Fosil Fuels?:

We at The Eastern Woodlands Fusion would like to point out that the products we use from the very high heat of the manufacturing process produced by fossil fuels are foundational. As Jernlontoret explains, steel products alone include:

This is a monumental order. I don't see any of us giving up our cars, new house contruction, expanding businesses and progress in medicine.

We've gotten here in a couple of centuries through growth and consumption.

We have to change.

But the change is going to be painful.

And, not changing is going to be even worse. 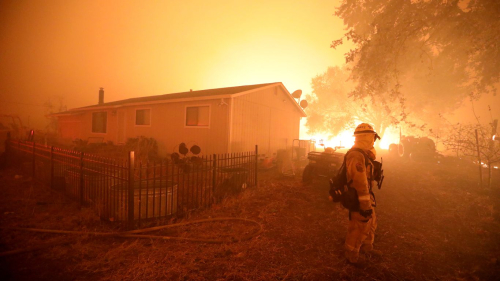 A Cal Fire firefighter watches over a structure threatened by the Kincade Fire on Oct. 27.