As Vincent Scully noted,  “It follows, therefore, that the first fact of architecture is the topography of a place and the way human beings respond to it with their own constructed forms.”

Scully went on to say: 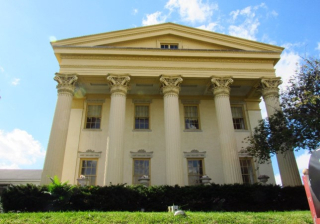 Do they attempt, for example, to echo the shapes of the landscape or to contrast with them? In a rather too large generalization, it might be said that all pre-Greek or non-Greek cultures chose the first alternative and the Greeks more or less invented the second.

Nowhere is the contrast with the natural world of the woodlands more apparent than with Rochester, New York’s Jonathan Child House, where Greek and Roman influence abound.

In 1834, Jonathan Child, the first mayor of Rochester, commissioned architect S.P. Hastings with this majestic hilltop mansion. For his wife Sophia, who was the daughter of Nathaniel Rochester, the founder of Rochester, and himself, built 1837-1838, the house was far more grandiose than any other home in the then fledgling city. 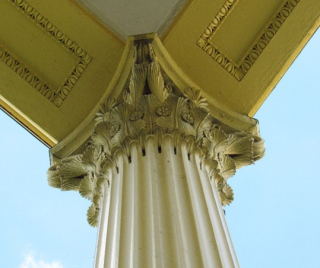 Child requested that the mansion be designed with the elements of ancient Greek architecture, for he wanted a classical Greek temple style building.

The end result included five 11-foot-tall Corinthian columns across the front, ornamental cornices and elliptical domed ceilings.  The porches on either side of the mansion are flanked by Ionic columns.

When I visited the mansion, I saw that adjustments were made from original Greek buildings such as: use of wood for the columns instead of marble, many windows and multiple chimney’s for fireplaces. However the Greek influence is everywhere, like traveling back in place and time.

Intricate antique work is on the cornice, the frieze, the entablature and the porch ceiling as well as above the windows. 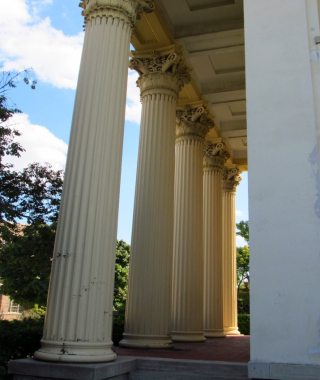 There are square coffer panels in the porch ceiling.

When the mansion was originally built, it was simply called “The Jonathan Child House”, however locals quickly labeled it “Child’s Folly” both for its size, style and the lavish parties and balls that took place here.

Threatened with demolition in the 1950’s, the mansion found a savior in the Landmark Society of Western New York.  It is currently referred to simply as “Pillars”, standing with its columns and low pitched roof as a symbol of our own young country’s “antiquity” and a reminder of the enormous influence of ancient Greek architecture on western culture. 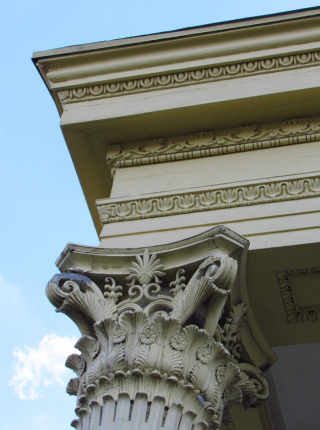 A Corinthian column with egg & dart in the mouldings of the entablature. 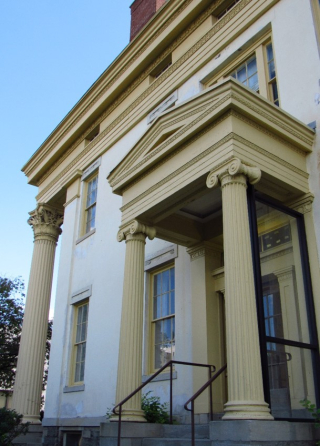 A side porch with pediment supported by Ionic columns.

A drawing of various carvings (from GetArchive,net). 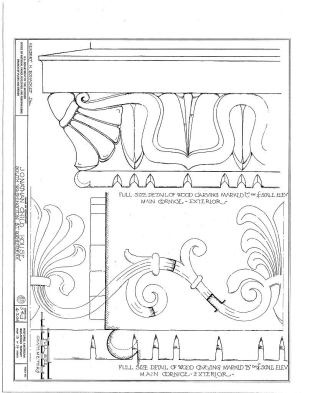 The portico with urns. 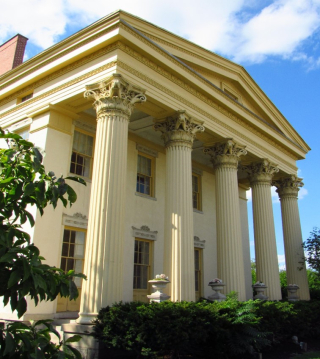 Very nice pictures of the place I have forgotten for years! I always meant to see for myself, spend some time just looking at time gone past. Now I have to do it!

Richard--agreed--there is so much Greek and Roman Revival architeture in the East, much of which is quite compelling. Glad we could interest you--thanks--Marc Cirigliano, ed.