Home Ecology Politics Creative Writing Arts Archives About Us
Breaking News - More Than One in Four Birds Lost Since 1970
... from Amy Harder at Axios:

Saber Rattling Against Iran: We Already Have a Lot of Military Bases There

Saber Rattling Against Iran by Marc A. Cirigliano 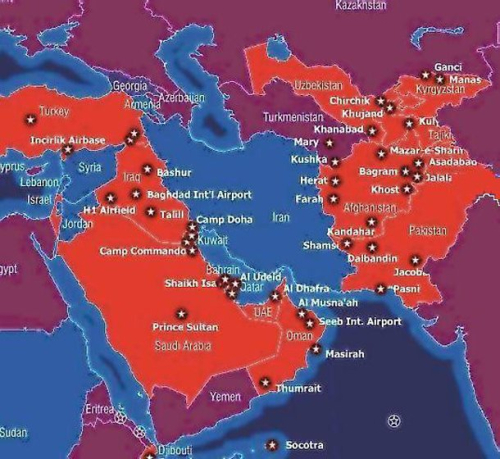 As President Trump commits more US troops to the Middle East, this time to bolster Saudi defenses against an alledgedly aggressive Iran, we should keep in mind that the US already has a significant military presence in the Middle East.

Jeff Klein at Massachusetts Peace Action frames this, not unreasonably, and then asks:

Now that Donald Trump has withdrawn the US from the Iran nuclear agreement, repeatedly bombed Syria, unreservedly backed every Israeli demand and continued the US involvement in the Saudi-UAE war on Yemen, tensions in the Middle East are escalating more than ever.  We have to ask what role our country is actually playing there – and how we can act to avert more violence in that war-torn part of the world.

As a not unreasnonable rejoinder, the American Security Project, judiciously states:

Over the years, some of these bases or facilities have caused controversy. Some have come under discussion as regional disputes have brought their use into question. Overall, they are tools that provide significant regional stability and influence in a region that is strategically important to U.S. security interests.

Perhaps, and I say say that very reservedly, perhaps this might have been avoided if Trump has not pulled out of the Iran nuclear treaty, officially known as the Joint Comprehensive Plan of Action (JCPOA), to spite President Obama. The "spite" comes from an allegation by former British Ambassador to Washington, Sir Kim Darroch, who characterized Trump's actions as "diplomatic vandalism."

As the Daily Mail reported in their headline:

Trump, if you view him sympathetically, is at best petulant, a staunch advocate of the realpolitik of "telling it like it is" in advancing American interests.

Such petulance served him well, in the Machiavellian sense, in the cut-throat big leagues of of New York real estate, where he has over 3500  lawsuits against him for non-payment of contractors and employees. The stakes here in real estate, on the Armaggeddon Scale of destroying the world, are comparatively small.

On the other hand, such petulance in this specific on-going Iran crisis has the two intial consequences: 1) The US furthering the brutal policies of an anti-human rights and genocidal Saudi regime. 2) Helping Trump's business ties to and profits from the Saudis, both personally and as official US defense business, contracting with the Saudis to build high tech military bomb parts. (What securty breaches could happen here?)

But, most importantly, his action to support Saudi Arabia with a commitment of more military troops because things with Iran are going south has the real consequence of starting another Middle East war.

Shooting his mouth off and pulling the US out of the treaty with Iran have now developed real world consequences.