The Eastern Woodlands and the Challenge of Climate Change

The Eastern Woodlands and the Challenge of Climate Change by Marc A. Cirigliano

The U.S. Global Change Research Program (USGCRP), a congressionally mandated Federal program, describes the Eastern Woodlands through an October view from Mt. Mansfield in Vermont as a bursting panorama of colors, for “the eastern forests and woodlands are known for this colorful fall display of leaves.”

The USGCRP explains that the  woodlands cover a vast expanse, “from Maine to Florida and west to the Mississippi River, these forests once stretched almost unbroken across the region, but now coexist with people in some of the most heavily populated areas of the world.”

The variety of trees is amazing, with deciduous that “include oaks, maples, beech, birches, and hickories.” And, of course, in select areas, there are evergreen conifers, but “they are not as common or dominant as the deciduous trees except under particular types of local conditions.”

There is also a wide variety of terrain making “landscapes from the rugged Adirondack Mountains in New York and the Appalachian Mountains that span the entire eastern seaboard, to rolling hills, valleys, and plains.”

And, the landscapes are as varied as the flora and fauna, with “varying climates, soils, altitudes, and frequencies of fire, all of which play key roles in determining the composition of trees that make up forest stands.” The landscape provides multiple forest layers with fruits, nuts and berries for the animals, which include “migratory birds on their journeys north and south, as well as year-round residents such as red northern cardinals, gray squirrels, black bears, white-tailed deer, raccoons, red foxes, and opossums.”

As you may have noticed if you read your usual news sources, the climate in the Eastern Woodlands is changing. The USGCRP describes it, “higher temperatures and changes in precipitation patterns are projected to have large, wide-ranging impacts on the eastern forests’ composition, productivity, and sustainability.”

The amount of climate change through warming is significant. In fact, “the eastern United States has seen an increase of about 1°F (about 0.6°C) in average annual temperature since 1900… Already, we have seen that winters in the Northeast have warmed an average of 1.3ºF (0.7ºC) per decade since 1970 and extreme heat during the summer is becoming more frequent.”

In New York State, the rise in temperatures and the changes in precipitation is apparent to those who can recall what the weather was like in an earlier time. As the New York State DEC explains, “Undesirable climate change impacts frequently outweigh the possible benefits. Impacts are projected for public health, natural resources, agriculture, transportation, tourism, water supply and quality, public infrastructure, energy, and many other sectors.”

Some direct changes that we now experience, as stated by the NYS DEC, are:

The effect of global climate change and continental US warming also affect precipitation. The DEC says:

The sea level rise is particularly alarming, because it will mean the dislocation of millions of people and also render their current property essentially worthless as it becomes a part of the sea. The NYS DEC writes: 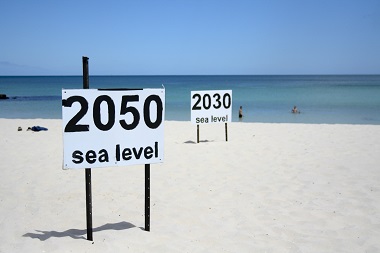 With such warming, then, it is not surprising that natural resources are, too, shifting:

The Massachusetts Executive Office of Energy and Environmental Affairs (EAA) concurs that “the Northeast has been warming at an average rate of nearly 0.26°C per decade since 1970, and winter temperatures have been rising even faster at a rate of over 0.7°C per decade.”

The EEA warns that “extreme heat days are on the rise - we now experience about 5 to 20 days of temperature over 90°F each year. These higher ambient temperatures have resulted in a 1.3°C increase in annual average sea surface temperature between 1970 and 2002.”

The entire eastern seaboard of the Eastern Woodlands is concerned about level rise with global warming. The Massachusetts EEA states that “Massachusetts is affected by sea level rise. From 1921 to 2006, relative sea level has risen 2.6 millimeters annually - an increase of approximately 26 centimeters per century.” That is just over 10 inches, but, if you live on the East Coast, that’s a pretty big deal, given that it is only going to rise more.

In fact, The North Carolina Climate Office (NCCC) voices serious concern because “there is a potential for the sea level to rise by about two feet off the Southeast coast over the next one hundred years.  Not only could this flood low lying areas like barrier islands, but it could also increase the salinity in estuaries, wetlands and tidal rivers.:

And, of course, with a sea level rise, you have a new and very dangerous problem of “vulnerability of coastal areas to the damaging effects of storm surge. Low lying areas that currently flood during heavy rains would likely flood more frequently, and others that don't currently flood may start to experience flooding.”

The New York State DEC sees the problem similarly for “by the 2050s, sea level is expected to be as much as 30 inches (2.5 feet) higher in New York's coastal area, as compared with sea level averaged for 2000-2004. By 2100, New York's coast could see up to 6 feet of sea-level rise.” And they warn that “New York is very vulnerable to the impacts of sea-level rise, including storm surge and coastal flooding.”

The Effect on Agriculture

The effect of climate change on agriculture will also be significant. In some cases, it could be good, with longer growing seasons, in others, it will require lots of resources and planning. The NCCC sees the changes in agriculture as “warmer temperatures would likely result in a change of the ecosystem. A few of the points they make include:

As the Massachusetts EEA see it, “changes in the climate can have subtle as well as devastating effects on humans, human infrastructure, and natural systems. An increase in temperature can cause:

The North Carolina Climate Office’s assessment agrees that “rising average temperatures and more frequent and more intense heat waves due to climate change are affecting human health in several ways.” They explain that “warmer average temperatures and more extreme temperatures put more people at risk for heat-related death and disease, such as heat stroke and dehydration.” And, this is key, because “in North Carolina, the number of heat-related visits to the emergency department increases by 15.8 for every 1°F increase in temperature from 98°F to 100°F.”

Climate change poses a variety of health risks. Widespread impacts may occur as a result of warmer temperatures increasing pollen production in plants and ground-level ozone formation, which exacerbates asthma, allergies, and other respiratory conditions.

Changed climate conditions also look to favor the survival of insects and disease carriers such as mosquitoes and ticks, making West Nile virus, Lyme disease, and other diseases more prevalent and opening the door to new pests and diseases.

Climate Change is already affecting the Eastern Woodlands. Increased threats of disease, heat related hospitalizations, forced adaptations to agriculture, rising sea levels along the coasts and changes in precipitation can only mean that we need to work to mitigate the amount of warming the future will bring. It's getting warmer, the oceans are rising and we need major steps to adapt and to mitigate the effects of climate change. The beauty of the Eastern Woodlands demands it.

Great article. Couldn’t be written much better! Keep it up!