Home Ecology Politics Creative Writing Arts Archives About Us
Ah ... The Best People: Ignoring the American Need for Environmental Deliverance for Over 50 Years, with a new Addendum
The Eastern Woodlands and the Challenge of Climate Change

It seems that it is all about the environment these days, no matter where you go. 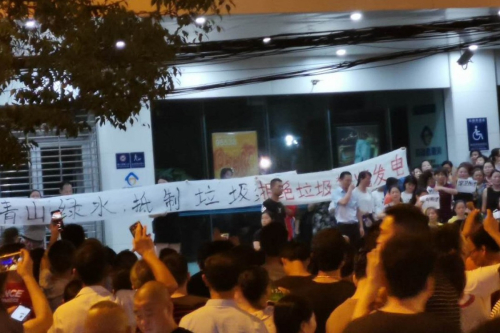 In central China in Yangluo, next to Wuhan, a city of 10 million, thousands of citizen demonstrated against a proposal to build a new waste incineration plant. From the South China Morning Post:

Thousands of people took to the streets in central China on Thursday night in a seventh day of protests against the construction of a waste incineration plant.

Protesters carried banners and chanted as they marched against a waste-to-energy plant that could be built next to residential areas in Yangluo, near Wuhan, the capital of Hubei province.

Residents were angered by plans to build the plant on a garbage landfill site that had been expected to be turned into a public park.

They shouted slogans such as “Return us the green mountain and clear waters” and “Garbage burning plant get lost from Yangluo”...

On the topic of garbage in China, here is a very nice article from GZero Media:

Last week, protests shook one of China's most important cities as thousands took to the streets to defend their quality of life. But the disturbances weren't about political freedoms, extradition laws, or judicial transparency. This wasn't the prosperous former British colony of Hong Kong but the sprawling central Chinese metropolis of Wuhan. And the protests were about…garbage.

Residents of the 10 million-strong city oppose the government's plan to replace a landfill site with a new energy-producing trash incinerator. The authorities say it's a more environmentally (and olfactorily) friendly way to dispose of the city's growing mountains of refuse. But many Wuhanese, particularly those who live near the proposed site, fear it will spew toxic fumes into the sky over their homes and schools. They don't believe the secretive local government's assurances that the newfangled plant will be safer than the filthy ones China has used in the past. So when rumors spread that construction had started, thousands poured into the streets, braving riot police and undercover cops to make their point.

The problem of what do to with trash is hardly unique to Wuhan of course — it's been a big issue in other Chinese cities in recent years. The thing about lifting a billion people out of poverty is that wealthier people consume more stuff, which means they produce more garbage. As that garbage piles up, people expect their governments to safely and efficiently dispose of it. This is a growing challenge for many rapidly developing countries, and even for some developed ones (see: Naples, Italy).

The Wuhan demonstrators were careful to distance themselves from the political protests a thousand miles away in Hong Kong. ..

(Articles published under Fair Use.)