Home Ecology Politics Creative Writing Arts Archives About Us
Trilogy from a Small Town by Andrew McGourty
Ah ... The Best People: Ignoring the American Need for Environmental Deliverance for Over 50 Years, with a new Addendum

A Serious Plan by Andrew Yang

Reported by Newsweek, we have a serious plan by Democratic Presidential candidate Andrew Yang to tackle climate change: 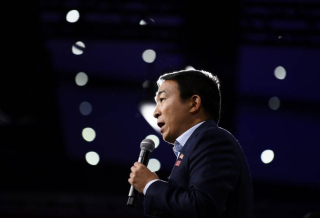 Similar to the objectives of the Green New Deal, Yang's plan is the latest ambitious proposal from a 2020 hopeful to address climate change and court Democratic primary voters...

...The timeline would be as follows:

The price tag for such a policy would top out at $4.87 trillion—which would be funded, in part, by eliminating oil company subsides and instituting a carbon fee and dividend. Yang estimates those measures combined would raise hundreds of billions of dollars per year...

Click here for the full article. Published under Fair Use.